Sunday on Full Tilt Poker sees the most valuable day of the FTOPS XXI series to date, with $1.35 million guaranteed in prizes over two multi-entry events. 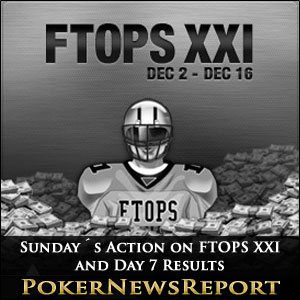 Sunday on Full Tilt Poker sees the most valuable day of the FTOPS XXI series to date, with $1.35 million guaranteed in prizes over two multi-entry events.

The opening event of the Full Tilt Online Poker Series last Sunday saw 5,482 entries compete for a share of more than $1 million, and that figure could be broken by either – or both – of today´s FTOPS tournaments.

Two massive multi-entry tournaments are scheduled today in the FTOPS XXI series, with big guarantees promised in each and the expectation that many thousands of players will be trying to get their hands on some of the prizes.

Both tournaments have been brought forward to squeeze them into an already hectic Sunday schedule on [geolink href=”https://www.pokernewsreport.com/full-tilt-poker”]Full Tilt Poker[/geolink], but the good news is that 80 seats have been made available in last minute satellites for the target events – meaning that poker players with limited bankrolls can have a crack at winning some of the big money for just a relatively small buy-in.

FTOPS #17 is a multi-entry $129.00 buy-in SuperStack (5,000 starting chips) Knock-Out NL Hold´em tournament with $600,000 guarantee in prize money. The action starts at 10.30 server time (3.30pm GMT) with each player being allowed up to three entries – not one entry and two re-buys, but three distinct and separate entries into the event.

Late registration is available up until the end of Level 10 (12 minute levels up to Level 16, so for two hours) and $20.00 from each entry is the bounty on a player´s head – so the eventual winner could collect a sizeable bonus considering the many thousands of players expected to compete in this tournament.

FTOPS #18 is also a multi-entry event with each player allowed to enter up to three times into the $322.00 buy-in Superstack NL Hold´em tournament (6,000 starting chips this time) with a guaranteed prize pool of $750,000. The tournament starts at 13.30pm server time (6.30pm GMT) and is expected to continue into the early hours of Monday morning.

If you need an afternoon nap before settling down to play, late registration is available until the end of Level 9 (15 minute levels up to Level 17, so for 2¼ hours) and, if the thought of committing 3 buy-ins to the tournament squeezes you bankroll, take a look at some of the last minute satellites to the event detailed below.

Both last minute FTOPS satellites are Turbo NL Hold´em events, with 1,500 starting chips and five minute levels. Both tournaments also allow two entries per players and have late registration up until the end of Level 6 (30 minutes).

Apart from the number of seats guaranteed in each event, the only difference between the two qualifying tournaments is that the satellite to FTOPS #17 has a buy-in of $33.00 (please note this satellite is not a knock-out tournament) and the buy-in to the last minute satellite for FTOPS #18 is $55.00.

It is a Late Night Saturday on FTOPS XXI Day 7

The first Saturday of action in the Full Tilt Online Poker Series witnessed three guarantee-busting tournaments which all ran into the early hours of Sunday.

The first event of the day was a $535.00 Double Stack Heads-Up tournament which attracted a field of 301 players to bust the $100,000 guarantee. As with all heads-up events that have fields of this size, it took a long time to play down to winner – 10½ hours in fact – but, in the final match-up, it took “canofcorn22” little more than twenty minutes to beat “naimad89” and claim the $36,372 first prize.

A field of 534 contested the 6-Max Triple Chance PL Omaha Hi event – creating a prize pool of $160,200 which was shared among the final 66 players. More than 11 hours after the cards were in the air, “veeea” emerged victorious over “The_Real_Kid87” although, due to a deal at the final table, with slightly less money than the runner up.

There were also plenty of winners in the final event of the day – the SuperStack NL Hold´em Rush tournament. 905 players participated in the $216.00 buy-in event – almost doubling the $100,000 guarantee and sending 90 players to bed satisfied with their evenings work. “Branko07” from the UK stayed up latest to defeat Germany´s “BrainBuster777” in the climax of the tournament and take home the $41,630 first prize.

The big mover at the top of the FTOPS Leaderboard competition was from “callyoudownn” – who leapt from 9th position into 2nd with a fourth place finish in the 6-Max PL Omaha tournament. “Tenkamusou”, who finished eighth in the same tournament, moved into fifth placed courtesy of his cashes in previous FTOPS events; one place behind “OneUponAStar”, who cashed in both the Heads-Up and Rush tournaments, and had a very long day at the tables.