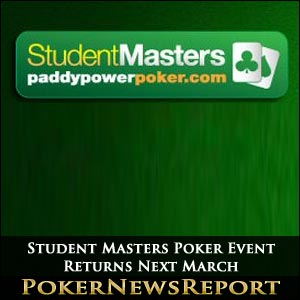 Students looking to add more than a few bucks to help them through their studies – and avoid massive tuition fees come graduation – will line up for “a bigger and better” Student Masters Poker event in Ireland come March of next year.

The Irish Open kicks off on the following Saturday and runs until April 9, so every student who enters will be eager to win that seat to assist with their studies.

University of Limerick student Jamie Flynn, who won this year’s Student Masters Poker tournament in March to take home €3,000 ($4,090/£2,569), as well as an Irish Open seat, said: “When I heard that paddypowerpoker.com was awarding the winner of the Student Masters a seat into the Irish Open, this tournament became a must-play for me.

“It was always a dream of mine to play in the Irish Open and I can tell you now it certainly did not disappoint.”

PaddyPowerPoker.com will run freeroll qualifiers on the first Sunday of every month, starting on December 4 until March 4 next year, while €5 ($/£) rebuy qualifiers have already started at the website and take place on every Monday.

Paddy Power, the website’s communications manager, said: “Following the sold out event earlier this year, we couldn’t wait to get working on a bigger and better Student Masters event for 2012.

“Players lucky enough to reach the final table will get an opportunity to play under the lights of the Irish Open 2012 feature table.

“The overall winner will then represent the students in the Irish Open main event 2012 the following day, playing against some of the best poker players in the world for approximately €550,000 first prize. It doesn’t get much better than that.”