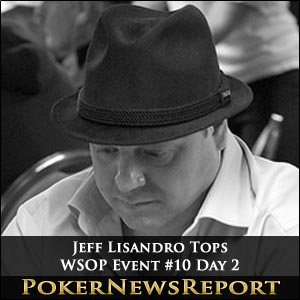 Salerno’s Lisandro bagged 276,500 chips during the $5,000 buy-in Seven-Card Stud tournament in the Amazon Room of the Rio All-Suite Hotel & Casino, while New York-based Ukrainian Katchalov ended the day on 207,000 to sit just ahead of California’s John Monnette (188,000) in third place.

Ten levels were played out last night, with the money bubble just being burst when one-time WSOP champ Freddie Ellis hit the rail in 17th place after seeing his 10s run into the kings of Seattle’s Lee Goldman (10th on 124,500).

But Day 3 will start off with 2009 WSOP Player of the Year Lisandro – who took down three Stud tournaments that year – well in control, although not every entrant enjoyed such a good day, with last year’s second place finisher Steve Landfish, of Vermont, crashing out after failing to recover from oversleeping.

Steve Landfish Out of Comfort Zone

Landfish had been anted off for a short while before he eventually made it to his seat, but then struggled throughout as his stack became shorter and shorter – before he decided to move all-in after completing the bring-in against Todd Barlow and Brandon Guss.

Barlow called, only for Guss to raise. Barlow made the call, with the same action repeated on the turn, fifth and sixth streets, before Guss checked on seventh. Barlow then bet out, prompting Gus to muck his cards with a fold.