As the field combines, tensions rise and play intensifies. 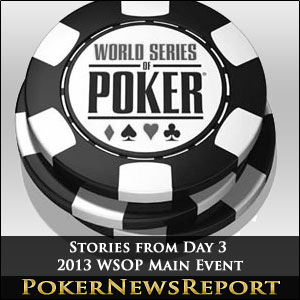 As the field combines, tensions rise and play intensifies.

Day 3 of the WSOP Main Event began with 1753 hopefuls remaining. Approximately two-thirds of them will go home empty handed, while the others will duke it out for the most coveted prize in poker. Some will be happy just to min-cash; others will be disappointed with anything short of a final table appearance.

Yes, Day 3 is the day when the contenders distinguish themselves from the pretenders. It’s a day when the money bubble draws near, when tempers flare and when suckouts sting just a bit more than they did the day before. Day 3 also makes for some great moments of high poker drama. Let’s take a look at some of the more noteworthy stories of this year’s decisive Day 3:

Only the most recognizable player in all of poker, Phil “Poker Brat” Hellmuth, capped off a lousy 2013 with an early exit from the Main Event. After a stellar 2012, that saw the 48-year-old win the WSOPE Main Event, Hellmuth only cashed in three events in this year’s WSOP, and only banked one top-ten performance. Perhaps next year Phil should try showing up to tournaments on time.

In breaking news, the first player to cross the 1 million chip barrier is none other than a middle-aged amateur. Forget Phil Ivey, forget Daniel Negreanu – no-name poker player Dick van Luijk is currently the man to beat. The Belgian is currently sitting on 1.1 million chips, after scooping two massive pots.

Speaking of Phil Ivey, the highly regarded pro went to war with early chip leader and 2010 November Niner Michael “The Grinder” Mizrachi. In that pot, Ivey cold called a 3-bet from Mizrachi out of the big blind. The flop came J♣10♣4♦ and Ivey bet nearly the entire pot. Mizrachi called. The turn came the 7♠. Ivey fired out another huge bet of 70k before Mizrachi mucked. It’s hard to ever put Ivey on a hand, but this journalist believes Ivey had the goods. Last time we checked Ivey had a well above average stack of 400k.

Analytical pro Phil Galfond also leaked some chips as he called a large river bet on a 6♠J♥3♠7♠5♠ board. His opponent held the A♠; not the nuts, but good enough to win the hand. Galfond is on thin ice as his chip stack has fallen below 100k.

As of the time of this writing, less than 1,000 players remain. Whereas two days ago the average stack was relatively deep, it is now alarmingly short. The field probably won’t play down to the money tonight, as hand-for-hand play typically slows the action down considerably, but what we do know is that a min-cash is going to be worth slightly over $19k and a win nearly $8.4 million. That’s quite the difference.