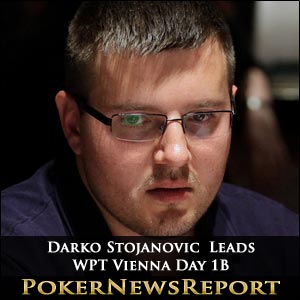 Darko Stojanovic – a French-based poker player whose only previous live success came in a side event at last year´s Euro Finals of Poker – takes a commanding chip advantage into Day 2 of the WPT Vienna Main Event, more than 140 big blinds clear of his nearest rival.

Stojanovic´s massive lead is all the more remarkable as he was well under the radar until the final level of the day when he trebled his chip stack up to 320,000 chips in less than an hour.

The early levels of Day 1B at the WPT Vienna started no differently from many other WPT Main Events. Arnaud Mattern, Vanessa Selbst and Steve O´Dwyer made lively starts while, later in the day, veterans of the World Poker Tour – notably Vincenzo Natale, Carsten Jeppe and Sam el Sayed – flip-flopped the lead between them. Indeed, as Level 7 drew to a close, the leaderboard gave no indication of the fireworks that were to follow.

Stojanovic´s next victim was Raschke Tillmann, who failed to connect with the board (A♣ 7♣ 6♥ / Q♦ / 10♦) against the Frenchman´s audacious pre-flop bet with 7♥ 5♦, and thereafter Stojanovic controlled the table by c-betting in every hand and forcing experienced players to roll over and lay down their cards.

As most poker players are aware, with such an aggressive player in your midst the best thing to do is wait until the very best hands come along before getting involved. McLean Karr (2♣ 3♣) thought he had done just that when flopping a straight on a board of A♣ 4♦ 5♣, and after three rounds of betting got all his chips into the middle against Stojanovic (J♣ 4♣). Unfortunately for Karr, a river club gave Stojanovic a better flush and he was out in practically the last hand of the day.

Readers of yesterday´s WPT Vienna report will be aware that a “first-man-out” side bet on the event was made between Team [geolink href=”https://www.pokernewsreport.com/bodog-poker”]Bodog Poker[/geolink]’s Tatjana Pasalic and McLean Karr where the loser would wear a catsuit to the first day of the WSOP Main Event in Vegas in June.

Karr was allowed off the hook after busting out prior to Pasalic on Tuesday, as the WPT Vienna Main Event was a re-entry tournament. However, as Pasalic did not re-enter after herself getting busted, the bet was revised so that Karr would win the bet only if he survived Day 1B. With his late elimination by Stojanovic, it looks as if we will be watching McLean Katt in Las Vegas!

It is not too unusual to see a “set over set” situation develop at some stage of a well attended major tournament – indeed Vincent Gomez eliminated Ana Marquez in this fashion in Level 6 – but “set over set over set” is fairly unique.

The players with their chips committed to the pot on a flop of A♠ J♥ 9♦ were Sonny Anderson (pocket 9´s), Jordan Lewis (pocket Jacks) and Ferenc Gal (pocket Aces). The turn and river failed to provide any help for Anderson or Lewis – who will both have impressive bad beat tales to relate in the future – while Gal finished the day in nineteenth position with 114,600 chips.