Romanian poker player Andrei Stoenescu leads the remaining 155 players towards the money in the Main Event of PokerStars.fr-sponsored EPT Deauville after Day 2. 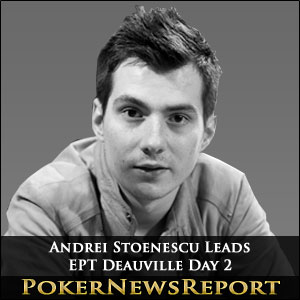 Romanian poker player Andrei Stoenescu leads the remaining 155 players towards the money in the Main Event of PokerStars.fr-sponsored EPT Deauville after Day 2.

With 155 players remaining in the EPT Main Event – and only 120 to get paid – the early levels of Day 3 promise to be a tense affair. 60 of the players returning to their seats today will have 20 big blinds or less (Level 15 blinds 1,500/3,000 – ante 400); while, behind runaway leader Stoenescu, the chasing packed are very similarly stacked.

Stoenescu´s leap into the ascendency came in the very last hand of the Day 2 action after setting Konstantinos Nanos (Ace-Jack) all-in for 150,000 chips pre-flop and rolling over pocket Aces. Stoenescu will take 485,600 chips into Day 3 and has a fairly comfortable table draw, with only Vladimir Velikov (on whom Stoenescu has position) bringing more than 200,000 chips to the table (Stoenescu also has Vanessa Rousso seated next to him, so it could be a very good day for the Romanian!).

The Brits are Coming

Had it not been for Stoenescu´s late hand, British poker players would have been in control of the EPT Deauville Main Event. Eastbourne´s EPT Loutraki winner, Zimnan Ziyard, enjoyed a superb day to finish second in the chip counts with 380,200 chips, while Wimbledon´s Irish Poker Open winner James Mitchell at one point climbed to over 400,000 chips before falling back in the last Level of the day to finish on 372,400 chips.

Just outside the Top Ten Chip Counts (below), Sam Grafton – who recently won the UKIPT Grand Final – has 311,400 chips, while Matt Frankland (144,400 chips) and Ben Warrington (48,900 chips) would have been closer to the top of the leaderboard had it not been for some late misfortune. Unfortunately 2010 winner of the EPT Deauville Main Event – Jake Cody – crashed out of the tournament just before the dinner break.

Day 3 of the EPT Deauville is likely to be a game of two halves. The first half of the 6 scheduled levels today could be very cagey but, once the bubble bursts, except the action to be fast and furious. Those who make it into the money are assured of a €8,000 min-cash, but players such as Stoenescu, Ziyard and Mitchell will be looking to the €770,000 first prize and hoping that their good Day 2 performances can be maintained all the way to Saturday´s climax of the event.