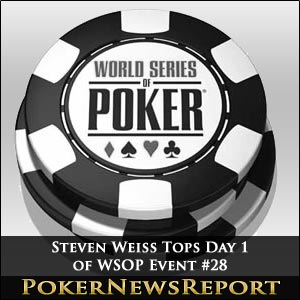 American Steven Weiss leads the way after Day 1 of the $2,500 buy-in Four-Handed No-Limit Hold’em event #28 at the World Series of Poker (WSOP) in Las Vegas.

A total of 750 players entered the event – creating a prize pool of $1,706,250 – but only 86 survived to make it into Day 2. That just six places short of the money in this inaugural four-max tournament at the WSOP, with all chasing down the $392,476 top prize and gold bracelet.

Play settled down somewhat following the dinner break, with Rast taking down a huge pot against Ohio’s Byron Kaverman in level 9. Last year’s Poker Players champ made a full house, queens full of tens, on the river to beat Kaverman’s sevens full of queens. Rast check-raised all-in during this hand, with Kaverman tanking for more than five minutes before calling to hit the rail in dramatic fashion.

The money bubble should burst fairly early today in the Orange Section of the Rio’s Amazon Room, with 80th place picking up $4,385.