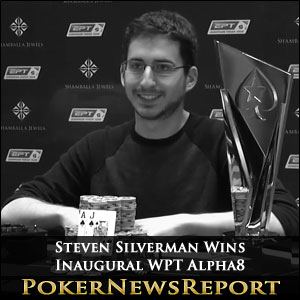 The Seminole Hard Hotel and Casino in Hollywood, Florida played host to the super high-roller event.

After outlasting an exclusive field of 18 players, Steven Silverman would be crowned the first Alpha8 champion. His victory would be good for $891,660, more than 40 percent of the total prize pool. On route to winning the title, Silverman would have to fade a plethora of feared and respected pros including Joseph Cheong, Jason Mercier, and 2013 November Niner JC Tran.

Featuring a staggering $100,000 buy-in, the ClubWPT.com sponsored tournament would only pay the top four finishers, with a min-cash worth approximately $250,000. Nine players would return from the Day 1 field and of the three players who re-entered into the tournament, (Issac Haxton, Daniel Alaei and Daniel Perper) none would cash.

Businessman and recreational player Bill Perkins would be the first player eliminated as his A♣4♥ could not stand up against Issac Haxton’s A♦8♥. Shortly thereafter, Mercier would tangle with JC Tran. The two would get it all in pre-flop. Mercier showed A♦A♥ for the pre-flop nuts and Tran A♠10♠. But in a stunning reversal of fortune, Tran would hit the nut flush on the river, leaving a stunned Mercier crippled. Mercier would lose the rest of his chips to Alaei, who would go runner-runner trips against Mercier’s flopped two pair. Mercier, who is notorious for running good at live tournaments, started the day second in chips, only to bust in eighth – tough break.

Alaei would drop in seventh and Joseph Cheong in sixth. Jeff Gross would min-raise to 20,000 with Q♣4♣ from the button and Cheong would defend rather loosely with 6♥5♠. Both players would flop the equivalent of gin for their marginal hands as the flop came 5♣9♥6♣. Cheong would lead on the draw heavy board, and call Gross’s all-in for 75k more. The 10♣ hit right on the turn, and Cheong would not improve on the river, sending him to the rail in sixth.

Poor Issac Haxton, who already was in for $200k, would be the bubble boy, when his 10♠10♦ couldn’t hold against JC Tran’s A♠Q♣. Giantz, who began the day as the chip leader, would be bounced in fourth.

Shortly after, Gross would shove with K♥10♣ from the button only to looked up by Silverman’s big blind special – A♠K♣. The flop brought an Ace and Gross was drawing nearly dead. He failed to improve and was eliminated in third, good for more than $364k.

The heads-up battle between Tran and Silverman would last a mere 10 hands, despite both players being approximately equal in chips and fairly deep. In what goes down as a mild cooler, Silverman would take a huge early lead when his 9♣9♦ would hold against Tran’s A♥J♥. Soon after Silverman would shove with Q♦9♦ and the pot-committed Tran would call with Q♠8♦. Unfortunately for Tran, he was dominated. However, Tran would take the lead on the flop – spiking an 8♠. But the turn brought a 9♠ and the river a Q♥ and Silverman was declared the winner. Tran received a lofty $526,890 for his efforts – mere pocket change compared to what he could win in November.

For Silverman it was the second biggest cash of his six-year professional career. Earlier this year, he won the EPT $25,000 NLHE High Roller event at Monte Carlo. His victory was good for slightly over $1 million.