Steven Loube is One For One After WSOP Event #47 Win

Atlanta solicitor Steven Loube has scored big with his victory in the $1,500 buy-in Pot-Limit Omaha Hi-Lo Split-8 or Better event #47 of the WSOP. 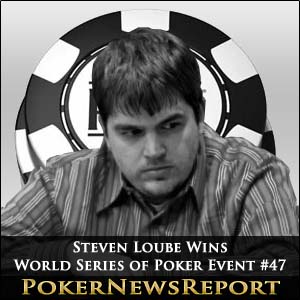 Atlanta solicitor Steven Loube has scored big with his victory in the $1,500 buy-in Pot-Limit Omaha Hi-Lo Split-8 or Better event #47 of the World Series of Poker.

The personal injury lawyer from Atlanta picked up $267,345 in his first WSOP tournament in Las Vegas by defeating Arizona’s Tim Finne heads-up to smash his biggest previous cash of just $50 in a gift certificate form from a home game!

Loube had to outlast 977 other starters in this event at the Rio All-Suite Hotel & Casino, but walked away with the gold bracelet following eight hours of play on Day 3 after starting his head-to-head with Finne holding a 3 to 1 chip lead.

It only took Loube a few hands to complete his incredible debut WSOP tournament when hitting a fortunate heart on the river to best Finne – who now has three third places and a runners-up spot from the WSOP.

The final hand saw Finne limp in from the button, Loube quickly raise the pot to 180,000, and Finne make the call to see a flop of 3♥ 10♥ K♠. Loube sat quite still for a few moments before betting 360,000. Finne then took some time to consider his options before re-raising all-in. Loube immediately called to show A♥ 7♥ 4♦ 3♦ for the nut flush draw, as well as backdoor low possibles, while Finne revealed K♣ Q♦ J♠ 6♥ for two kings and an open-ended straight draw.

Loube’s friends called for a heart, but the Q♣ gave Tucson’s Finne two pair and closed out the low possibilities. However, the latter was eliminated as runner-up for $165,486 when the 9♥ arrived on the river to complete his flush.

The 34-year-old first-time champion had said ahead of his victory that “my biggest cash before this was a $50 [gift certificate] – good for food, but not for liquor”. Well, Steven can certainly now indulge himself on the booze, if he so chooses.

Viatcheslav Ortynskiy Out in 10th

Finne then eliminated Iowa’s Paul Ewen in ninth place for $19,052, while Vegas-based Kyle Carlston – the fourth place finisher in this tournament in 2009 – was soon knocked out in eighth place for $24,386.

A short while later, Edmonton’s Sharma limped in, but then saw button Loube raise the pot to 106,000. Small blind Finne called, Sharma moved all-in for 139,000 in total and Loube also called. The flop came J♦ 10♣ 6♠ and Finne check-folded after a pot-sized bet to leave Loube and Sharma to face-off.

Greek Charalampos Lappas – who had started the day as chip leader – hit the rail in fifth place for $55,479. Lappas just couldn’t quite get going on the final day and exited not long after failing on a river bluff.

With play now four-handed, another three-and-a-half hours passed before Canada’s Cameron Mckinley exited in fourth for $75,151. The Vancouver player was eliminated when fellow Canuck Roch Cousineau raised it to 100,000 from under the gun and was called by big blind Mckinley.

Cousineau revealed 2♠ 4♠ 7♠ 3♥ for two pair and the nut low, while Mckinley showed A♠ 4♦ 6♦ 5♠. The K♣ came on the river and Mckinley got up to leave the table, only to be called back as it was quickly discovered that he still had 50,000 chips. Unsurprisingly, he hit the rail on the very next hand as the remaining trio took a dinner break.

Action was thrilling and swift after the break, with Cousineau, Finne and Loube enjoying some double-ups before the Canadian was crippled by Loube. Cousineau hit the rail in third place for $103,538 on the next hand when he moved all-in for his final 60,000.

Small blind Loube called while big blind Finne checked, before the 9♣ K♥ 9♠ A♦ J♣ board was checked down. Cousineau showed two queens, but they weren’t good enough as Loube tabled J♦ 9♥ 6♦ 10♠ for a full house.