Steven Brackesy leads to battle it out with Daniel Santoro, Christian Harder, Bob Carbone, Andy Frankenberger and Eli Berg for $449,910 and the WPT bracelet. 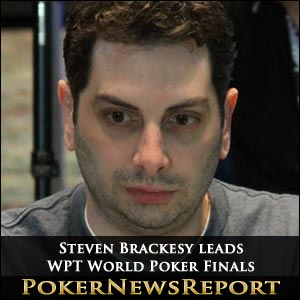 Only 81 hands were played on day five of the World Poker Tour (WPT) World Poker Finals at Foxwoods Resort Casino in Mashantucket, Connecticut. Just two players had to be eliminated for the six-handed final table to be set – and the unfortunate duo were Jonathan Little and Chris Klodnicki.

With Little and Klodnicki hitting the rail, the final table will see chip leader Steven Brackesy battle it out with Daniel Santoro, Christian ‘charder30’ Harder, Bob Carbone, Andy Frankenberger and Eli Berg for the $449,910 top prize and WPT bracelet.

By the close of play, Brackesy – from Waltham in Massachusetts – had chipped up to 1,807,000, which is approximately 112 big blinds and a just below one-third of the total chips in play.

Bracksey faces a battle on day six, however, as the likes of Harder, in second place, and Frankenberger remain in contention.

Harder picked up $132,623 for finishing fourth at event #31, a $3,000 buy-in Pot-Limit Omaha tournament, at this year’s World Series of Poker (WSOP), while Frankenberger made two final tables at last year’s WPT – winning the Legends of Poker event at The Bicycle Casino in Los Angeles for $750,000 – to emerge as the Player of the Year.

Hand 58 saw the day’s first elimination when, after the action had folded to Little, who was on the button, the Floridian moved all-in for 169,000.

Norway’s Berg, in the small blind, folded to leave big blind Brackesy, who thought about his decision for more than 60 seconds, to call with A♠-5♣.

Little showed 5♥-9♥ to be in trouble and was given almost no help from a K♦-4♠-7♠ flop. But the turn showed the 6♣ to give both players open-ended straight draws, with Little’s nine coming into play if an eight were to arrive on the river.

However, the 2♥ was dealt and the Season Seven World Poker Finals winner crashed out in eighth place for $54,060.

The second and last elimination of the day came 23 hands later and saw New Jersey’s Klodnicki become the final table bubble boy when Brackesy also sent him to the rail.

On the button, Brackesy raised to 25,000 and Klodnicki, in the small blind, called. The flop showed 5♦-4♦-3♠ and Klodnicki bet 54,000. However, Brackesy moved all-in, easily covering Klodnicki’s approximately 300,000 remaining chips.

Klodnicki paused but then called to show A♥-5♥ for the top pair, while Brackesy revealed A♦-6♦ for straight and flush draws.

The turn showed K♦ to complete Brackesy’s flush and leave Klodnicki drawing dead. The A♣ river was unimportant and day five finished just ahead of the end of play in level 21. Klodnicki picked up $68,465 for his seventh-place finish.

Seat draw and chip counts for the final table of the WPT World Poker Finals: