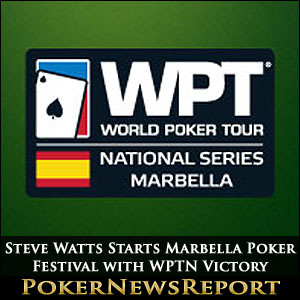 The Marbella Poker Festival comprises of nineteen events over a two week period at the H10 Casino in Puerto Banus, with the three highlights being the WPT National Main Event, the WPT National High Rollers and the Grand Live (formerly the GSOP Live).

The first of those three events concluded last night; with Londoner Steve Watts taking down the €550.00 buy-in WPTN Marbella Main Event for €31,000 and immediately asking his bemused Spanish interviewer how many players had entered the Grand Live which gets underway at noon today.

The field only included eight Spaniards, and their number was quickly reduced when Paco Torres lost the first flip of the day against Richard Cashman (who was born in the UK but who plays all his poker in Spain) and Omar Rodrigues lost the second all-in of the day against Olov Vestgards, who was subsequently the first player through the million chip barrier.

Brits Start to Tumble, but Watts Gets Lucky (Part 1)

Clive Saxby fell in sixteenth when the German Joh Carsten spiked a King on the River, and he was soon joined on the rail by Neil Mackay – whose Ace-Five failed to improve past Omar Anaya´s Ace-Ten – and Sunny Chattha, whose deep run came to an end in twelfth place after his pocket Queens failed to hold against Carlos Duran´s Ace-Nine.

By comparison, all the British good fortune was being directed towards Steve Watts. Watts managed to flop a set of Queens to stay alive in the tournament and double up against Konstantin Kostyakov´s pocket Kings, before hitting a set of Kings to eliminate Olov Vestgards in tenth after Vestgards had paired his Ace on the flop.

The eight-handed final table was set when Ian Murray ran his Ace-Jack into Daniel Cervan´s pocket Aces, with Steve Watts already in a commanding position:

With blinds about to rise to 20,000/40,000 (ante 5,000) when the players took their seats, there was not a lot of hanging around by the shortest stacked players. Mauricio Isa was eliminated from the event within a couple of hands when his Ace-King shove was called by Steve Watts (Five-Six suited). Watts flopped a Seven-high straight to bust Isa in eighth place and then chipped up to 3,375,000 chips when eliminating Richard Cashman in seventh place with Queens > Ace-Seven.

Jose Maria Solis (sixth) and Daniel Cervan (fifth) were eliminated in the same hand when Carlos Duran´s pocket Queens held up against his compatriots smaller pocket pairs; but Steve Watts´ good roll continued and he bust Joh Carsten in fourth after checking through a flopped set of Sevens and calling Carsten shove with a top pair of Kings.

Watts took a 6.8 million -v- 1.2 million chip advantage into the heads-up against Omar Anaya after rivering a diamond flush to bust Carlos Duran in third place; and the climax of the WPT National Marbella lasted just two hands – Anaya doubling up in the first hand with Ace-Six > pocket Tens, and then Watts pairing an Ace on the flop in the next hand to best Anaya´s pocket Eights and win the WPTN Marbella title.