Steve Sung brought Day 2 of the WPT Bay 101 Shooting Stars to a close with a big chip lead after knocking out Kelsey Hendricks in the last hand of the day. 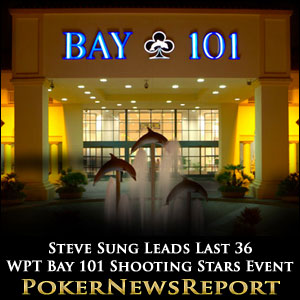 Steve Sung brought Day 2 of the WPT Bay 101 Shooting Stars to a close with a big chip lead after knocking out Kelsey Hendricks in the last hand of the day.

It was a very long day for players who survived Day 2 of the WPT Bay 101 Shooting Stars event after three late registrations brought the total number of players competing for the $1,256,550 first prize at the start of play up to 300.

With it looking exceedingly unlikely that the field would be reduced to the scheduled final eighteen within eight 90-minute levels, the decision was made to play down to the last thirty-six players or 2.00am – whichever came first.

Ironically on the stroke of 2.00am, Steve Sung eliminated Kelsey Hendricks in thirty-seventh place to shoot into a substantial chip lead and bring the proceedings on Day 2 to a close half way through Level 21 (blinds 6,000/12,000 – ante 2,000).

The tournament is called “Shooting Stars” because selected star players have $2,500 bounties placed on their heads and, when they are knocked out, their conqueror receives a commemorative medal and a signed t-shirt in addition to the cash prize. On Day 2 of the WPT Bay 101 Shooting Stars event, it was a good day for bounty hunters – as all the remaining 23 players with bounties on their heads were eliminated.

Leading the exit of stars from the tournament was Andy Frankenberger, who shoved his last 20 blinds with A♥ 10♣ but failed to connect with the board and improve past Thomas Lutz´s 9♠ 9♣. Frankenberger was followed by a host of stars including Ludovic Lacay (A♥ 7♣ < Chad Eveslage´s A♠ Q♦), Antonio Esfandiari (2♥ 2♦ < Dom Fernandes´ A♠ K♦) and Jason Mercier (K♥ 4♦ < Kumar Sripadam´s A♥ 7♥) until Jeff Masden was the last shooting star still in play.

Masden´s demise was particularly unfortunate, as he had moved all-in with K♥ Q♥ and was called by Brandon Crawford who had also been dealt King-Queen as his hole cards (K♠ Q♦). A chopped pot was the most likely outcome after the flop of A♠ 2♦ 10♠, but the board finished 8♠ on the Turn and 3♠ on the River to complete Crawford´s flush and send Jeff Masden to the rail in 45th place.

Bubble Bursts before Hand-for-Hand can Start

Following the departure of Matt Salsburg in seventy-fourth place (10♦ 10♥ < Phil Van Tran´s K♠ Q♣), Tournament Director Matt Savage announced that hand-for-hand play would commence in the next hand. However there was still action going on at one table in which Justin Zaki was at “risk” with pocket Aces against Mukul Pahuja´s pocket Deuces. Pahuja flopped a set of Twos to bust Zaki, and the remaining seventy-two players were each assured of a $14,430 min-cash.

The traditional rush to the cashier´s desk followed; during which time Larry Odegard was the first player to breach the one million chip barrier when he knocked out Darren Elias K♥ J♣ > Q♣ 10♣, and Bryce Yockey – who had cracked Will Failla´s Aces yesterday with a rivered gutshot straight to remain alive in the tournament – also chipping up beyond the million chip mark.

However, the most successful player during the later stages of the WPT Bay 101 Shooting Star event was Steve Sung, who hit a really hot streak throughout the final hour of play. Sung was responsible for the departure of Will Chao in forty-fourth place (10♥ 10♦ > A♠ K♣), Brandon Crawford in thirty-ninth place (J♠ J♣ > 10♣ 9♣) and Kelsey Hendricks in thirty-seventh place, to finish the day with 1,812,000 chips.

The schedule for Day 3 of the WPT Bay 101 Shooting Star is to play down to a final table of six. The average stack is currently 50 big blinds and, despite Steve Sung´s massive chip advantage, only five players have fewer than twenty big blinds to play with.

The players at the top of the leaderboard have all managed to avoid each other in the re-draw for Day 3 (the game will now be played six-handed), so it is likely that the six players who contest the final table will come from the following list: