While the first Epic Poker League Main Event is nearly ready to get underway, poker pro Steve O’Dwyer took down the league’s first ever Pro-Am tournament. 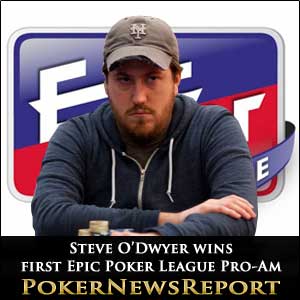 While the first  Main Event of the Epic Poker League is nearly ready to get underway, poker pro Steve O’Dwyer took down the league’s first ever Pro-Am tournament early this week.

The tournament drew in 189 players and O’Dwyer won a seat into the $20,000 Main Event, as well as a $23,180 prize for his efforts.  O’Dwyer’s name may sound familiar, as he recently won the $5,000 No Limit Hold’em event at the Bellagio Cup just three weeks prior to the start of the Epic Poker League’s first event.

The Epic Poker League is a series of large poker tournaments which take place at the Palms Casino Resort in Las Vegas, Nevada.  The league was begun by Federated Sports + Gaming, and is run by former World Series of Poker commissioner Jeffrey Pollack, with Annie Duke serving as the commissioner.  The league is different than most poker tournaments and events out there, as it will only allow players who have met certain qualification criteria’s to enter the events.  The criteria is broken down to multiple different things such as number of tournaments won, lifetime earnings, tournament cashes, and many other things which help find some of the top live tournament players in the world.

Part of the complex ranking system that the Epic Poker League uses includes the Global Poker Index (GPI).  This Index is set up to rank players based on their live tournament play, and factors in multiple things.  Before O’Dwyer’s big win at the Bellagio Cup, he was ranked 129th, but his win should vault up between 100th-120th.

The poker league’s first Pro-Am featured a final table a few unknown poker pros, but O’Dwyer was the chip leader heading into the six-handed final table.  While winning the event was a very nice added pay day on top of his Main Event seat, seats to the $20k Main Event were given to each player who finished in the top 9 at the Pro-Am.  The $20k Main Event kicked off today, Tuesday at 12:00pm PST.  This huge prize pool will also add an additional $400,000 into the pool, making this a huge pay day for whoever is able to take down the event.  O’Dwyer and the other top 8 finishers at the Pro-Am won their way in, and O’Dwyer will look to add to his more than $1 million in live tournament winnings heading into the event.

The Epic Poker League’s Main Events are done a bit differently than some of the other large poker events around the world, as they are six-handed tables, and players receive 50,000 starting chips.  Each of the first two days will feature six, 90-minute levels, with blinds beginning at 100/200.  Players are able to register for the event up until the start of Level 5.

While the Epic Poker League is fairly new, it’s looking as if it has already begun to gain quite a bit of popularity, and could continue to be on the rise.  The league even has a $1 million freeroll for the top 27 money winners throughout all of the four Epic Poker League Main Events on February 13, 2012.