Steve O’Dwyer Moves Up To Fifth on Global Poker Index

American Steve O’Dwyer made the most notable move inside the top 10 of the GPI 300, moving up three spots into fifth place. 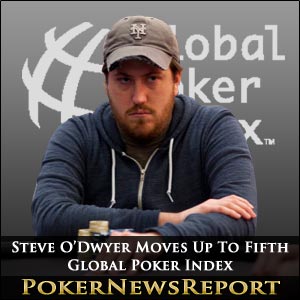 American Steve O’Dwyer made the most notable move inside the top 10 of the Global Poker Index (GPI) 300, moving up three spots into fifth place, as the poker world took a well-earned break before thousands of players converge on Las Vegas for two massive festivals.

Of course, the 43rd World Series of Poker (WSOP) begins on Sunday, May 27, in the Rio All-Suite Hotel & Casino, but – even before event #1, the $500 buy-in Casino Employees No-Limit Hold’em tournament, starts – the World Poker Tour (WPT) World Championship in The Bellagio will have ended just the day before the biggest poker tournament of all.

So, although the index is relatively quiet right now, it is more than likely we will see some huge changes in the rankings over the next few weeks – particularly with so many GPI-ranked players sure to be in Nevada until mid-July.

Returning to this latest ranking list, the calm before the storm comes as a result of very few new results being reported – although event ageing has caused some movement inside the top 20.

Brandon Cantu Drops Out of Top 300

That means seven players dropped off the GPI 300. They were North Dakota’s Tom McCormick – from Fargo, no less, for all you fans of the Cohen Brothers’ movies – as well as Vegas’ Michael Binger, Finland’s Markus Ristola, Frenchman Lucien Cohen, New York State’s Kyle Bowker, Danyel Boyaciyan, of the Netherlands, and Washington State’s Brandon Cantu.

French Triple Crown winner Bertrand ‘ElkY’ Grospellier remains at number one on the list for a third successive week, even though he lost 42.05 points to now hold 2,885.26. That drop would have been enough to see second placed American Jason Mercier take over at the top, had he not also lost 47.44 points to sit at 2,861.95.

Still, the gap between the top two is still small, standing at just 23.31 points as the busiest time of the poker calendar approaches.

A second American, David ‘Doc’ Sands, remains in third place behind the Team PokerStars Pro team-mates, having stayed steady at 2,581.70 points, while Canadian Sorel Mizzi lost 8.41 points to also see no change to his ranking in fourth place.

But Vegas-based O’Dwyer just squeaked inside the top five, enjoying the positive effects of ageing scores. The Pennsylvanian’s fifth place for $26,715 at the Five Star World Poker Classic $5,000 buy-in No-Limit Hold’em event back in May of last year aged into Period 3 after not being counted in Period 2 on the previous list.

With four higher scoring events counting in that period, O’Dwyer’s performance in Vegas was excluded – only to then provide him with a 77.67-point boost as it joined two other Period 3 scores.

Canadian Mike ‘Timex’ McDonald – like O’Dwyer – benefits from ageing scores to join the top 10 in ninth place after climbing five spots on to 2,332.42 points.

As with O’Dwyer, that result was excluded from his Period 2 score, but now joins just one other Period 3 result to see the 22-year-old climb back into the top 10 after a two-week absence at the expense of fellow Canadian – and Team PokerStars Pro – Daniel Negreanu, who falls one place into 11th on 2,280.75 points.

As with the top 10, there’s not a lot to report from places 11 to 20 as no new results counted for any of these players.

However, California’s Bryn Kenney and Finland’s Juha Helppi did lose ground after suffering the negative side of ageing scores.

Flying Finn Falls Out of Leading 20

Ageing events are also his enemy on this latest list as the 35-year-old sees two tournaments fall into lower periods. Helppi’s runner-up finish for $178,108 at last May’s EPT Grand Final €5,000 buy-in No-Limit Hold’em Eight-Max drops into Period 3 to cost him 114 points because of the lower multiplier employed.

If that wasn’t bad enough for the one-time WPT champion, that result also ensures that his fourth place for $21,348 at last April’s EPT Berlin €5,000 buy-in No-Limit Hold’em Six-Max event is now excluded from Period 3 due to the capping system to knock off another 63 points.

Fortunately, the Finnish pro did lessen the blow slightly when picking up 49 points as his fourth place for $5,720 from last June’s Midnight Sun €1,000 buy-in Limit Seven-Card Stud event in his home town now counts in Period 2 after the EPT Grand Final result aged into Period 3.

Still, while it certainly wasn’t a good week for Helppi, New York’s Vanessa Selbst will be happy to secure her return to the top 20 at 19th following a week-long exclusion after climbing two spots, even though the Team PokerStars Pro remained on the same 2,190.06 points.

Vegas-based Matt Giannetti – who enjoyed an incredible autumn last year with victory for $276,457 in the WPT Malta €3,000 buy-in No-Limit Hold’em main event, as we three more final table appearances – had started this year off slowly to see his ranking slip.

But the latest list’s biggest scorer and second most impressive place climb came from Italy’s Mustapha Kanit, who gained 297 points to move on to 1,670.48 with a 76-place move into 67th following his runner-up spot for $63,048 in the Italian Poker Tour (IPT) San Remo €5,000 buy-in No-Limit Hold’em High Roller Event.

The biggest place gain, however, went to Sweden’s Kent Lundmark, who moved up 82 places into 134th after adding 222 points – the second biggest addition this list – for a 1,400.05 total following his second place finish for $129,287 at the Unibet Open Paris €1,500 buy-in No-Limit Hold’em main event.

Meanwhile, Englishman Rob Akery suffered the biggest drop after he slipped 72 places into 266th on 1,085.42 points when the Bristol player’s runner-up spot for $134,249 in a €2,000 buy-in No-Limit Hold’em side event at last May’s EPT Grand Final fell into Period 3.

Meanwhile, there is no change within the top 10 of the Player of the Year standings – meaning French-Canadian Jonathan Duhamel (595.68) maintains his 61.26-point lead over second placed American Dan Smith (534.42).

The most notable upwards movement came from San Jose’s Faraz Jaka, who climbed 18 places into 11th on 367.27 points, although Norwegian youngster Borge Dypvik shot up an impressive 68 spots into 29th on 311.92.

Dypvik also did well in San Remo, pocketing $97,149 for winning the High Roller to secure his climb up the GPI PoY standings.

Scott Baumstein Up To 35th

Frenchman David Lichentin flies in at 339th as the highest new entry on 124.10 points after picking up $39,390 for finishing sixth in the €1,500 buy-in No-Limit Hold’em main event of the Unibet Open Paris at the start of the month.

Things should be shaken up a bit more soon enough, however, as the WPT Championship is now in full swing at The Bellagio in Las Vegas, while the 43rd annual WSOP starts on the 27th at the Rio with the Casino Employees event.