American professional poker player Steve O’Dwyer led from the front on the final day of the World Poker Tour (WPT) National Denmark to pick up DKK893,960 for winning the main event at the Casino Munkebjerg Vejle. 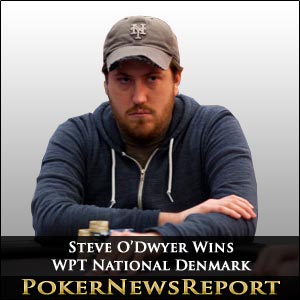 American professional poker player Steve O’Dwyer led from the front on the final day of the World Poker Tour (WPT) National Denmark to pick up DKK893,960 for winning the main event at the Casino Munkebjerg Vejle.

It’s been a profitable few weeks, and months, for the Las Vegas-based player – who has taken to the road in Europe following the events of Black Friday last April 15 – after he pocketed $51,265 for finishing seventh in the DKK 35,000 buy-in No-Limit Hold’em main event of the European Poker Tour (EPT) Copenhagen to take his live tournament winnings to almost $2.5 million.

O’Dwyer – who now has six titles to his name – is in doubt that he is on a fortunate streak, saying: “It’s been a lucky two weeks for me. Any time I play a big pot, no matter if I’m ahead or behind, it doesn’t seem like I ever lose”.

In Vejle, O’Dwyer saw off 288 other starters in the €1,650 (about $2,179) buy-in main event that offered a prize pool of approximately $572,220 as he ultimately outlasted five Danish opponents – eliminating all of them – at the six-handed final table after four days’ play in southern Denmark.

Day 3 ended when O’Dwyer eliminated another Dane, Thomas Windtbjerg, as the final table bubble boy when the American overcame the short stack.

Windtbjerg shoved all-in with K♣ 10♥ after O’Dwyer had raised with Q♦ 10♣. The Dane was well ahead and looked sure to double-up – and maybe secure a place at what could have been an all-Danish final table – only for a queen to arrive on the turn to give O’Dwyer the knockout.

Champion Leads From the Front

Having knocked out the other four Danes at the final table, O’Dwyer then entered his heads-up battle against Tønnesen with a 4 to 1 chip lead over his opponent. All that changed, however, as the home favourite fought back to hold a better-than 3 to 1 chip advantage, before two hands gave the American the crown.

Tønnesen’s chip stack was demolished when he made a brave, but ultimately failed, bluff on a board of Q♦ J♠ 3♥ 5♥ J♥ when holding just A♥ 8♠ to be faced by the heart flush of O’Dwyer, whose hole cards were K♥ 10♥.

The American was now in control and soon finished off the job when Tønnesen called all-in with A-9 but failed to beat the pocket tens of O’Dwyer.

Winner on an Amazing Roll

Certainly, the American has enjoyed an incredible seven months, having kicked off his successful run with victory in the $5,000 buy-in No-Limit Hold’em event at last July’s Bellagio Cup for $259,452.

O’Dwyer also made several other final tables between last summer and now, with his second place for $128,063 at the €3,000 buy-in No-Limit Hold’em main event of December’s WPT Venice his next massive cash.

It really is incredible that every cash from that first one back in July last year to this latest in Denmark has resulted in a top 10 finish. That’s 13, if you are counting, for a $1,527,899 total. Nice work, Steve.

Some of O’Dwyer’s fellow pros have been impressed, too, with one-time World Series of Poker (WSOP) bracelet winner Scott Seiver taking to microblogging website Twitter to write: “Huge congratulations to @steveodwyer He’s on a @JasonMercier level European run right now.”

But maybe the greatest compliment came from the legendary Doyle Brunson – a 10-time WSOP bracelet winner – who replied to Seiver’s tweet with: “You are right. I played with Odwyer in London and he impressed me, which is pretty hard to do.”

The latest WPT event starts in San Jose’s Bay 101 Shooting Star today for five days’ play and includes a $10,000 buy-in main event, before the tour then heads back to Europe for the WPT Vienna, which takes place at the Montesino from April 10 to 15 and offers a €3,500 buy-in main event.