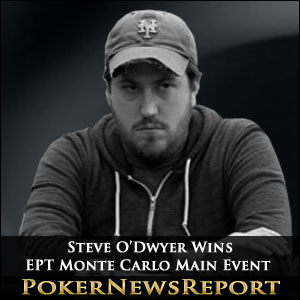 The conclusion of the EPT Monte Carlo Main Event was a tournament to savour. The eight players who had battled through five days of competition to reach the final table had combined live poker earnings of $39 million and included two previous EPT Main Event winners, a member of the WPT Champions club, the winner of the inaugural APPT Main Event and four PokerStars pros.

As the final eight players took their seats, Steve O´Dwyer had a narrow chip advantage over Andrew Pantling, with the two players owning more than half of the chips in play between them. However, the chip lead was to change many times during the course of the day before those two players were to ultimately contest the heads-up.

Levy Flushed Out by Pantling´s Clubs

With blinds at 15,000/30,000 (ante 4,000), none of the players were immediately at risk, but after Daniel Negreanu had rivered a Broadway straight to relieve Andrew Pantling of 600,000 chips, Pantling bounced back into second place with the elimination of Grant Levy in eighth. Levy had moved all-in on the flop of 3♠ J♥ 7♣ with A♥ K♠ and was snap-called by Andrew Pantling (J♣ 10♣). The turn card A♣ gave Levy top pair, but it also completed Pantling’s flush, and the Australian was first to bust out of the conclusion to the EPT Grand Final.

No Double EPT Win for Mercier

While Steve O´Dwyer and Daniel Negreanu seemed hell-bent on exchanging chips with each other, Andrew Pantling took a significant chip lead with the elimination of Jason Mercier in seventh. Mercier had managed to double up against Daniel Negreanu (10♠ 9♠ for trip Nines > A♦ K♦) but then took a hit against Johnny Lodden before running his Q♠ 10♥ into Pantling´s A♦ Q♦. The board ran Nine-high to bust the first of the PokerStars pros.

Daniel Negreanu´s chip stack had been going up and down faster the value of Bitcoins; but having conceded a major pot to Andrew Pantling which he would have won (had Negreanu known he had the better kicker) he was then responsible for the dual elimination of Noah Schwartz and Jake Cody.

The flop of Q♣ 8♣ 7♦ gave both Schwartz and Cody hope of unlikely draws, but the 8♥ killed Schwartz´s prospects of winning the hand and the 10♠ was not the Black Jack Cody needed to stay in the game. Schwartz – being the shorter stacked of the two players to be eliminated – was bust in sixth, while Cody left the tournament in fifth.

Despite the dual knockout of Noah Schwartz and Jake Cody, Daniel Negreanu – who needed victory in the EPT Monte Carlo Main Event to complete his Triple Crown – was the next player to depart. His vanquisher was Johnny Lodden, who twice lucked out against the recent WSOP APAC Main Event winner.

In the first of two significant hands, Lodden doubled up with 9♥ 9♦ against Negreanu´s Q♦ Q♣ when he spiked the 9♣ on the Turn, and then Lodden called Negreanu´s 4♦ 4♠ shove with A♦ Q♦ and watched the board come down K♣ 10♥ 2♠ / 9♥ / J♠ for a rivered straight. Negreanu was out in fourth and Lodden – who just a few minutes earlier looked like being eliminated was on the tail of Andrew Pantling, with Steve O´Dwyer now the player at risk.

Johnny Lodden´s departure from the EPT Monte Carlo Main Event practically mirrored Daniel Negreanu´s decline and fall, as Steve O´Dwyer catapulted himself back into the reckoning with a double up against Johnny Lodden and then busting the Norwegian.

In the double-up hand, Steve O´Dwyer (6♦ 6♣) had five-bet all-in during the pre-flop action and was called by Lodden (Q♠ 10♣). O´Dwyer´s pair held, and a few hands later Lodden made another terrible decision when shoving on a flop of 7♣ 4♠ 10♦ with A♥ J♦. Steve O´Dwyer had the easy call to make with A♦ 10♥, and Johnny Lodden was out in third.

The chips counts going into the heads-up saw Andrew Pantling (8.690 million chips) hold a 25 Big Blind chip lead over Steve O´Dwyer (7.235 million chips), but that advantage was soon to be turned the other way around when Steve O´Dwyer rivered a pair of Kings to best Pantling´s pocket Jacks.

Just before the dinner break the chip lead changed hands again, as Andrew Pantling won a big pot A♥ 4♥ > 8♥ 5♠ but in the next hand the chip advantage was back with Steve O´Dwyer who turned trip Aces against Pantling´s 10♠ 5♠.

In the first hand after the dinner break, O´Dwyer rivered trip Aces again to extend his lead to 11.7 -v- 4.1 million chips but, as if hitting trip Aces twice in succession was not fancy enough, Steve O´Dwyer saved the best till last in the hand which was to win him the EPT Monte Carlo Main Event title.

The 4♠ on the Turn gave Pantling his Spade Flush and, after Steve O´Dwyer had fired out a further 600,000 chip bet, Pantling check-raised up to 1,425,000. Steve O´Dwyer raised all-in and Andrew Pantling snap-called – looking likely to double back up into the chip lead.

However, Steve O´Dwyer had not read the script, and the 8♣ was dealt on the river – giving O´Dwyer his first EPT Main Event victory after appearing on an EPT final table on three previous occasions.