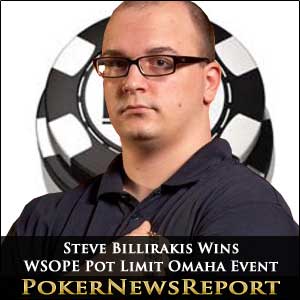 The American from Chicago, Illinois, ended a wait of two years for his third major live poker victory – having claimed a WSOP Circuit victory in 2008 following his Mixed Hold´em WSOP Bracelet success in 2007 aged just 21 years and 11 days.

The versatile Billirakis – who has WSOP cashes in Omaha Hi-Lo, HORSE and Stud Poker events – saw off a quality field of international poker stars which included Sam Trickett, Eoghan O´Dea and Jason Mercier, to claim his bracelet and €238,140 first prize, on a final day in which he never seemed to be in peril. Starting the final table second in chips, Billirakis kept a low profile throughout the early proceedings – exchanging a few small pots before springing to life once the table had become short-handed.

It was several hours before the final table began to take shape. Eoghan O´Dea was the day´s first elimination despite being ahead on the flop. O´Dea moved his last chips into the pot holding A♣ Q♣ J♠ 7♥ on a flop of A♠ 7♠ 6♦ against Sam Trickett´s A♦ Q♠ 10♦ 8♠. Unfortunately for O´Dea, the J♦ 5♦ completed Sam´s diamond flush and the November Niner was sent to the rail. He was shortly followed by Sam Chartier, who ran his A♠ 8♠ 5♠ 4♦ into Jerome Bradpiece´s nuts straight, and soon after Erich Kollman was busted when his Q♠ Q♦ J♥ 2♥ could find no answer to Ramzi Jelassi´s flopped straight.

Sam Trickett´s KO of Eoghan O´Dea had extended his lead at the top of the leaderboard, but Ramzi Jelassi was making ground on him, and briefly took the chip lead with the elimination of Konstantin Uspenskiy in sixth. At this point, with blinds increasing to 5,000/10,000, Billirakis lay fourth in the proceedings with 304,000 chips. However, he quickly stepped up a gear to first double up against Jerome Bradpiece and then eliminated the UK poker player, before being the first player to cross the million chip mark when taking an uncontested 400,000 chip pot from Jelassi.

Opposition Appears in the Form of Di Lauro

Michele Di Lauro left it even later than Steve Billirakis to get properly involved in the game – carefully circumnavigating the early hazards and building a respectable chip stack, the Italian was responsible for the elimination in fourth of Sam Trickett and took major uncontested pots from both Billirakis and Jelassi. Joining Billirakis on over a million chips, the heads up was set when Billirakis (A♥ A♠ 9♠ 5♣) called Jelassi´s shove with 10♦ 9♦ 8♦ 6♠ on a flop of A♦ 3♣ 2♦ and avoided the fifth diamond to bust Jelassi in third.

With a substantial chip advantage, it did not take long for the American to finish the game off. In the first hand of the heads-up, Billirakis caught a full house on the turn to dominate Jelassi´s flopped set of twos, and it was all over several hands later when the flop of A♠ K♦ 7♣ paired the A♣ K♥ in Billirakis´ hand to present him with the WSOPE Pot Limit Omaha Championship and first prize of €238,140.

180 players contributed to a total prize fund of €882,000 which was distributed among the top 18 players. The cashier´s roll-call looked like this:-