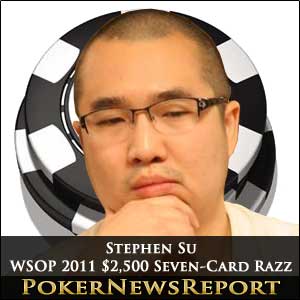 There will be an all-American heads-up battle to be finished tonight in the $2,500 Seven-Card Razz event at the World Series of Poker (WSOP) in Las Vegas as Houston’s Stephen Su takes on Washington State’s Rep Porter.

Having started out with 363 players to create a prize pool of $825,825, 10 levels on day three again failed to find us a winner as play was called to a halt at 3.30am local time due to the hard-stop rule.

Day three started with 23 players fighting it out for the gold bracelet and, following almost 12 hours’ play, that was cut to just two as the likes of Greg Dyer, Scott Bohlman, John Monnette – the $2,500 Eight-Game Mix winner at this year’s WSOP for $278,144 – Scott Bohlman, Victor Ramdin and Chad Brown were eliminated early.

Tommy Chen, of San Jose, was always close to the top for most of the first two days, but was eliminated in third place for $83,895 to leave us with one-time WSOP bracelet winner Porter – with success in the 2008 $1,500 Six-Handed No-Limit Hold’em event for $372,843 – and Su for a heads-up battle for the title.

Both players held the chip lead during Monday, but it is Su who will return this evening on top for the final day’s play – no matter how long it takes.