Stephane Bazin Gets All the Luck in Grand Live Cyprus Victory

French poker player Stephane Bazin won the Grand Live Cyprus Main Event this weekend for €39,400 after being a lucky, lucky man throughout the final table. 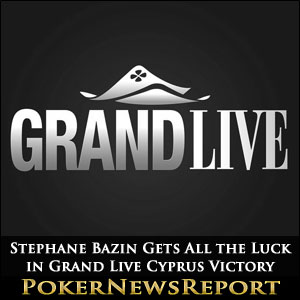 French poker player Stephane Bazin won the Grand Live Cyprus Main Event this weekend for €39,400 after being a lucky, lucky man throughout the final table.

The Merit Crystal Cove Casino in Kyrenia was the venue this weekend for the climax of the €1,100 buy-in Grand Live Cyprus Main Event and, after three days of action, the field of 168 players had been reduced to a final table of nine in pursuit of the €39,400 first prize.

At the head of the chip counts was Anthony Hairadedian – son of “Big Roger”, who had also competed in this event – but, if Anthony was to add the family name to the list of Grand Live winners, he would have to overcome the formidable obstacles of the aggressive Pole – Kamil Jamroz – and WSOP bracelet winner Antonin Tesseire.

Stephane Bazin´s run for Grand Live glory almost came to a stop a soon as the cards were in the air for the start of the final table. In the first major showdown of the day, Bazin moved all-in with A♦ 3♦ on a flop of 6♥ 3♣ 2♣ and got a call from Kamil Jamroz, who had been dealt pocket Nines. The K♦ on the Turn had Bazin rising from his chair and looking at an early exit, but the A♣ spiked on the River and gave him a vital double-up.

Short-stacked John Nordberg was not so fortunate with his attempted double-up – running his A♠ 4♣ into Marat Ermeev´s A♥ K♥ and failing to find the Four he needed on a Queen-high board. Nordberg was eliminated in ninth, and he was shortly joined on the rail by Andrei Mjagkov – whose K♦ J♠ failed to improve past Juhani Holm´s A♥ 9♠.

Sevens Up for Ermeev and Jamroz – Lucky, Lucky Man Part 2

Two big hands involving pocket Sevens changed the outcome of the Grand Live Cyprus Main Event. Marat Ermeev temporarily took the chip lead when eliminating Juhani Holm in seventh place 7♣ 7♠ > A♣ Q♦, and then Kamil Jamroz doubled-up against Anthony Hairabedian 7♥ 7♣ > A♠ K♦ to position himself at the top of the chip counts.

Stephane Bazin´s good fortune continued when he flopped a Queen to double-up against Anthony Hairabedian Q♥ 10♥ > A♣ K♥. Bazin then faded thirteen potential post-flop outs to bust Alexander Kostylev A♠ 8♠ > K♥ J♦ in sixth; and the field was reduced to just four when Bazin´s pocket Queens held against Marat Ermeev´s A♣ 10♦ to eliminate the Russian in fifth.

Hairabedian and Tesseire Fail to Bluff Jamroz – Leads into Heads-Up

Anthony Hairabedian´s participation came to an abrupt end in two hands. In the first he tried to bluff Kamil Jamroz out of his blinds by shoving with 6♠ 7♦, but Jamroz made the call with A♥ J♥ and paired both his pocket cards on the flop to double-up. Hairabedian then shoved the last of his chips with A♥ 5♥ into Antonin Tessseire´s A♦ K♣ but failed to find the Five he needed and was eliminated in fourth.

Kamil Jamroz then used his chip stack to good effect against Tesseire and Bazin to steal plenty of the increasing blinds (20,000/40,000 – ante 5,000) move into the chip lead, before Antonin Tesseire (10♠ 8♣) failed to bluff Jamroz (K♥ 3♦ – flopped two pairs) out of a big pot and was sent to the rail in third – giving Jamroz a 2.4 million -v- 1 million chip advantage going into the heads-up against Stephane Bazin.

In practically the first hand of the heads-up, Stephane Bazin was a lucky, lucky man once again. Following a flop of 2♦ Q♠ 2♠, Kamil Jamroz (3♥ 2♣) checked his flopped Trip Threes over to Bazin (8♠ 4♠), who announced he was all-in. Jamroz snap-called and was a 75% favourite to win the Grand Live Cyprus Main Event – odds which improved to 85% after the 7♣ landed on the Turn. However, the A♠ on the River completed Bazin´s flush draw and he moved into the lead in the heads-up.

Jamroz fought back, and moved into a narrow chip advantage, but Bazin´s luck was not about to desert him, and he doubled-up once again when his K♣ K♠ held against Jamroz´s A♦ 8♦ following a flop of J♦ 10♣ 2♦. Reduced to his last four Big Blinds, Jamroz moved all-in on the next hand with J♥ 9♥ and Bazin called holding Q♦ 7♥. The flop of Q♥ 8♦ 2♦ put Bazin ahead in the hand and left Jamroz hoping for a Ten to complete a gutshot straight. Unfortunately for the Pole, the board delivered the 5♠ on the Turn and A♥ on the River, and Stephane Bazin had become the 2014 Grand Live Main Event Champion.