A fantastic concluding day is in prospect for followers of the Epic Poker League Main Event, with David Steicke and Erik Seidel leading the final table. 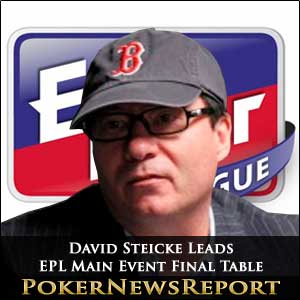 A fantastic concluding day is in prospect for followers of the Epic Poker League Main Event, with David Steicke and Erik Seidel leading the final table.

On a day in which controversy took a back seat to poker, the Epic Poker League finally delivered what the PR has been promising since the launch of the series – a decent day´s poker!

Twenty-three players took their seats at the start of the day with the sole goal of surviving until the close of play and reaching the lucrative final table. Eleven of them knew that they would go home empty handed, but that did not prevent some fairly rash play at the commencement of proceedings.

Any concerns the Epic Poker League may have had about a second embarrassing Chino Rheem victory where quickly dismissed, despite the “player under probation” taking out David Baker in one of the first hands of the day.  Within an hour, Rheem had been crushed by the J♣ J♠ of Allen Bari and then sent to the rail by Mike McDonald´s A♣ A♦. Soon after, the player for whom A♣ A♦ had been such a godsend on Day 1, Dan O´Brien (he was dealt the same pocket Aces three times in three levels and won each time), mistakenly chose to put his faith and tournament life on J♦ J♠ against Jonathan Little´s K♠ K♦, and knew his fate as soon as the K♥ hit the flop.

The final contentious issue vanished when Jaime Kaplan – who had only been given his seat following the “voluntary withdrawal” of Michael DiVita – went all-in on a flop of K♣ 9♠ 9♥ holding 10♣ 9♣, only to find Erik Seidel waving K♦ K♥ for the full house. Marco Johnson and Matt Marafioti also hit the rail in the early exchanges and, soon after the start of level 13 (two hours gone – blinds 2,500/5,000 – ante 500), just seventeen players remained.

The Steicke and Soulier Show

Whereas on Wednesday, David Steicke and Fabrice Soulier had mirrored each other´s success on the way to the top of the leaderboard, last night their fortunes could not have been more different. Soulier slipped from top spot early in the day after relinquishing a 98,000 chip pot to Sean Getzwiller when the (legitimate) Pro/Am qualifier shoved on the river. Conversely, Steicke took a 200,000 chip pot uncontested at the main expense of Matthew Glantz. From there on, the destinies of the two players drifted further and further apart.

Steicke was responsible for the double elimination of Christian Harder (3♥ 3♦) and Chris Moore (A♥ K♠) when his Q♦ Q♣ met with the Q♠ on the flop to give him top set, and then took chips from both Erik Seidel and Matthew Glantz when his 2♣ 2♥ helped him to a full house of Twos over Kings. In contrast, Soulier came second in a 6♦ 6♠ v J♠ J♥ race against Alan Bari and only remained in the tournament when two pairs boarded to chop a pot with Adam Levy. Although he remains in the tournament, he now has a below-average chip stack which is half the size of the chip leaders.

Erik Seidel, second to Chino Rheem in the inaugural EPL Main Event, holds second place on the leaderboard overnight, just three big blinds behind David Steicke. Having chipped up nicely with the elimination of Jaime Kaplan (above), his chip stack took a knock in the three-way pot won by David Steicke (also above). Seidel got back on track by eliminating Matthew Glantz in twelfth and then got engaged in a ding-dong battle with Mike “Timex” McDonald. First McDonald took 200,000 from Seidel when he flopped a set of Queens against Seidel´s mucked hand, but Seidel was to quickly double up in a fascinating hand of the day.

The tournament was on level 16, with blinds at 5,000/10,000 and an ante of 1,000, when Mike McDonald fired in a bet of 22,000 from under the gun. Seidel called and both watched the flop of A♦ 10♠ 8♣ being dealt. Seidel checked to McDonald, who fired in another bet of 22,000. Seidel responded by raising to 54,000 – which McDonald called. The 10♥ on the turn prompted a bet of 75,000 chips from Seidel which McDonald called, and the river 9♦ was met with a further bet of 130,000 from Seidel to which McDonald responded by shoving all of his chips in the middle. Seidel called immediately and revealed his cards – A♥ 10♣ – giving him a full house of Tens over Aces, whereas McDonald had been betting with 10♦ 8♦ – giving him a lower full house of Tens over Eights.