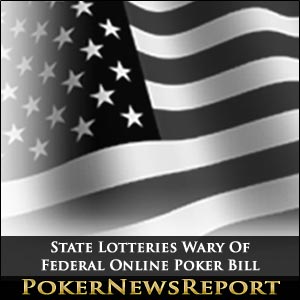 The Reid-Kyl proposal that is expected to be introduced during the lame-duck session of Congress following the November election aims to legalize poker, off-track horse wagering, and lottery sales over the Internet. However, the bill does have limitations, such as not allowing online casino games or sales of lottery tickets that would imitate casino games and slot machines.

The summary that we have seen is not terribly friendly to lotteries, Margaret DeFrancisco, co-chairwoman of the government relations committee at the North American Association of State and Provincial Lotteries (NASPL) told The Hill. It’s very restrictive. We don’t want and we don’t need any federal legislation concerning lotteries. Period.

Last year, governors such as Butch Otter (R-ID) and Martin O’Malley (D-MD) penned letters to members of Congress urging that states should be allowed to regulate gaming on their own and expressed concerns about legislation at the federal level interfering with state lotteries. The National Conference of State Legislatures (NCSL) and NASPL have called on Congress to afford respect to the sovereignty of states in regard to Internet gambling legislation. A spokesperson from Reid’s office said that the senator is cognizant of the concerns of various states and is more than willing to accept input from governors and state legislatures.

We have consulted extensively with a variety of stakeholders about the bill–including many states, said Kristen Orthman, a Reid spokeswoman. We have indicated to all that our door is open to continuing conversations.

The Reid proposal is designed to allow states to opt-in to the federal online poker scheme at their own discretion. By no means does the proposal aim to require all states to participate, as Utah has already enacted legislation opting out of any federal online gambling legislation.

I think this provides sovereignty to them, said former Rep. Jon Porter (R-NV), who now heads Porter Gordon Silver Communications and is a lobbyist for the Poker Players Alliance. You need to make sure that every state–large states and small states–has this opportunity [to opt-out].

Reid’s proposal has drawn plenty of criticism from those who believe that it was drafted in such a way as to benefit Nevada the most by excluding online casino games.

This [federal online poker bill] seems to be something just for Nevada, DeFrancisco said. But for lotteries, we represent almost all of the country.