Vladimir Troyanovskiy leads the 123 players remaining in the EPT Monaco Main Event after a brutal day which saw many of the event´s shining stars snuffed out. 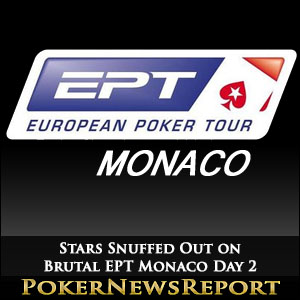 Vladimir Troyanovskiy leads the 123 players remaining in the EPT Monaco Main Event after a brutal day which saw many of the event´s shining stars snuffed out.

Casual observers will have difficulty recognising more than a dozen or so of the 123 players remaining in the EPT Grand Final after many of the world´s leading players bust out of the tournament yesterday. Although players such as Johnny Lodden, Philipp Gruissem, Sam Trickett and Ole Schemion progressed to Day 3, many of the chip leaders will be unfamiliar names to many.

At the top of the chip counts, Vladimir Troyanovskiy does at least have a sequence of results going back in excess of five years – including a second place finish in last year´s PCA High Rollers – and most people will have heard of David Silverman (currently in sixth place) after his triumph in last year´s EPT Monaco High Rollers and the inaugural WPT Alpha8.

Other players near the top of the leaderboard include Marcello Marigliano, whose last live poker cash came in the 2012 Partouche Grand Final won by Ole Schemion, Talal Shakerchi – who has at least won a live poker event in the past – and Nick Maimone, who narrowly missed out on a final table appearance in the 2009 WSOP Main Event won by Joe Cada.

Will the Last Star to Leave Monaco Please Turn Off the Lights?

With late registrations included, 351 players returned to the Monte Carlo Bay Resort for Day 2 of the EPT Monaco Grand Final, and many of the big stars had their lights extinguished almost immediately. Chris Moneymaker failed to improve past an opponent´s pocket Jacks to be one of the first players sent to the rail, where he was soon joined by his PokerStars Team Pro colleague Liv Boeree – eliminated by Ole Schemion 2♥ 2♠ > A♥ Q♠.

The Full Tilt Professionals did not fare much better – Victor Blom being eliminated when running into an opponent´s pocket Aces, and late-registering Gus Hanson becoming another of Ole Schemion´s victims within an hour of sitting down A♣ Q♥ > 2♠ 4♠. The chances of a first Spanish EPT Main Event winner took a blow as Juan Manuel Pastor bowed out within the first level, as did UKIPT winner Ludovic Geilich and recent WPT Venice winner Andrea Dato.

As the blinds increased through Level 10, the roll-call of busted out players began to read like a Who´s Who of (former) live poker champions – Max Altergott, Philippe Ktorza, Jordan Westmorland and Annette Obrestad were eliminated during the first half of the level; and they were joined on the rail before the end of the level by Benny Spindler, Byron Kaverman, Sorrel Mizzi and Yann Dion.

Nobody Seems to Wont Million

The announcement of the prize money failed to stem the flow of eliminations from the EPT Monaco Main Event as former UKIPT London winner Sergio Aido and EPT Barcelona champion Tom Middleton failed to remain in contention for the €1,240,000 first prize, while last year´s winner of this event – Steve O´Dwyer – ran the last of his chips into an opponent´s pocket Aces, and couldn´t conjure up an incredible suck out to match his winning hand in 2013.

More PokerStars Team Pros hit the rail during the third level of the day – Mickey Petersen´s Queens being beaten by Jacks, Marcel Luske´s Ace-rag being beaten by a worse Ace-rag, and Bertrand ElkY Grospellier mixing it up against fellow pro Johnny Lodden and coming second after his A♥ 10♣ failed to connect with the board against Lodden´s 6♣ 6♥.

Mike McDonald bust out with the most expensive hand in poker (A♦ Q♦ < Rhys Jones´ J♠ J♥), the lights went out on more PokerStars Pros – Eugene Katchalov and George Danzer – as the game entered Level 13, and then the biggest name still remaining in the tournament – Phil Ivey – was eliminated in a massive cooler against Marcello Marigliano, in which both players had flopped a straight, but Marigliano´s was the best of the two, and Ivey was out of the door and out of the money.

Looking Ahead to Day 3 of the EPT Monaco Main Event

The last level of the day (Level 14 – blinds 1,200/2,400 – ante 300) provided no sanctuary for the world´s top poker players, and among those eliminated from the EPT Grand Final was Antonio Esfandiari, Barry Greenstein, Marc-Andre Ladouceur and Dominik Nitsche – leaving just six PokerStars sponsored players remaining in the field of 123.

When those 123 players take their seats this afternoon, the blinds will have increased to 1,500/3,000 (ante 400) and the length of the levels to ninety minutes. For many, their primary objective will be to get in the money – ninety-five players will leave the EPT Grand Final with at least €19,200 in their back pockets – and those we expect to be among the front-runners for the prizes when the money bubble bursts include: