Stars Out in Force for British Poker Awards

The British Poker awards were hosted at the London Hippodrome on Monday night, with many of the UK´s leading players forgoing the Oscars to be in attendance. 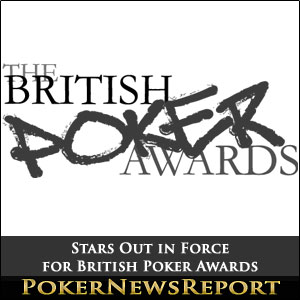 The British Poker awards were hosted at the London Hippodrome on Monday night, with many of the UK´s leading players forgoing the Oscars to be in attendance.

The cream of British poker (and one Canadian) was honoured at the Bluff Poker Awards on Monday night in front of a packed house at the London Hippodrome. The event kicked off with a sparkling drinks reception, entertainment provided by a live band and then the awards were announced by Michael Caselli – Editor-in-Chief for Bluff Europe Magazine.

PokerStars Has a Good Evening

It was also a good night for PokerStars, who picked up an award for the Best UK Tournament (EPT London) and the Best Tournament Director (Toby Stone) , as well as having three of their sponsored Team pros recognised for their achievements – one of them twice!

With Toby Stone unable to attend due to the UKIPT Dublin still taking place, and Daniel Negreanu over in LA playing the WPT Poker Classic, Liv Boeree collected awards on their behalf. Chris Moorman – also in LA – accepted his award via video, while Sam Trickett, Barny Boatman and Alex Millar also made dual appearances on stage.

Tony Kendall – selected as making the Best Contribution to Poker – modestly tweeted after accepting his award:

Many thanks to all @ BluffEurope for an amazing evening, the Award was a total surprise, & thoroughly undeserved.

There isn’t really any other event that brings players, industry and the public into one room to celebrate the achievements of poker.