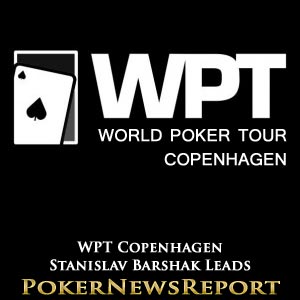 Day 3 of the World Poker Tour Main Event in Copenhagen was played at a far more sedate pace than its predecessors. Possibly the threat of elimination prior to the 27-player bubble tempered some of the naturally aggressive tendencies; but, even after the bubble had burst, the atmosphere within the Casino Copenhagen was much more relaxed than on Days 1 and 2.

Much of the early action revolved around the short stacks picking their spots to move all-in. Ghatthias Kartas twice managed to double up in the first level with A♥ Q♣ against the A♠ 10♣ of Christian Honore and then with A♦ A♣ against the A♠ K♥ of Jimmy Jonsson; but the timing of players such as Claudio Grillo (2♣ 2♠ < J♦ J♣) and Jonas Klausen (A♠ J♠ < A♥ K♦) was not so good.

Up at the top of the leaderboard there was a big surprise. Rasmus Nielson (K♦ 10♣) will have nightmares for a long time after inadequate bet-sizing allowed Sergii Baranov (7♣ 5♥) to get to the river cheaply on a flop of K♠ 10♥ 8♣. Baranov hit the 4♠ on the turn and 6♦ on the river to complete a runner-runner straight, and Nielson – one of the most feared players remaining in the tournament – was out, while Baranov took a temporary chip lead.

Kjaer Moves up a Gear

Overnight chip leader Frei Dilling Kjaer was also picking his spots to maintain his good position in the tournament. Jeppe Mikkelsen (K♦ 10♦) could not find the diamond he needed after the flop of A♦ 4♦ 4♥ to beat Kjaer´s A♣ 2♣, and Kjaer regained the chip lead when Erez Lilenthal´s A♥ J♠ could not improve against Kjar´s A♣ K♥. Kjaer finished the second level of the day by flopping a set of Tens to eliminate Kiell Ola Helgesen (pocket Eights).

Mid-way through level three the bubble burst. Ramaneetharan Selvanajagam was the unfortunate player, getting all his chips in with J♣ 10♠ against the J♥ 5♥ of Jan Djerberg, and looking good for a double up until the 5♠ spiked on the river. Soon after, Steve O´Dwyer lost a stack of his chips to Philip Jacobson (5♥ 6♥) when Jacobsen rivered a runner-runner flush and we also lost Sergii Baranov (A♣ K♠), who got all his chips in the middle on a flop of K♦ 10♥ 4♦, only to see Bircan Cakar turn over pocket Tens for a set.

Barshak Barks Loudest of All

With the top of the leaderboard changing practically every few hands, a new leader emerged in the penultimate level of the day. Stanislav Barshak had chipped up earlier in the day when flopping a set of Nines to best Jesper Mertz´s flopped set of Threes and, with his enhanced chip stack and aggressive betting, was able force Steve O´Dwyer and Frei Dilling Kjaer out of valuable pots as the blinds rose to 2,500/5,000 to finish the night with 830,000 chips.

Jan Djerberg moved up into second place, using the chips he had fortunately won against Ramaneetharan Selvanajagam to good effect, while the most active player in the later stages of play was Jimmy Jonsson – recovering from his set back against Ghatthias Kartas earlier to crack Rasmus Larsen´s pocket Aces with 9♠ 8♠ (hit two pair) and eliminate the short-stacked Yaron Zeev Malki (A♠ 6♠ > 5♥ 4♥). Play concluded for the day when Alexander Petersen ran his pocket Sevens into the pocket Kings of Philip Jacobson and was eliminated in nineteenth position.

With just 18 players remaining, Day 4 will play down to a final table of six. When the WPT Copenhagen Main Event recommences at the Casino Copenhagen at noon, there will be best part of an hour still to play in level 18 (blinds 3,000/6,000 ante 1,000) and the average chip stack is 381,666. Christian Honore (95,000 chips) and Steve O´Dwyer (110,000 chips) are the players with the shortest stacks, while those who will have the luxury of taking their time again include:-