Michael Waxman, spokesman for the SSIGI, lashes out against the recently submitted anti-iGaming legislation submitted by Lindsey Graham and Jason Chaffetz. 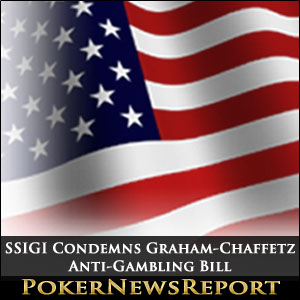 Michael Waxman, spokesman for the Safe and Secure Internet Gambling Initiative , lashes out against the recently submitted anti-iGaming legislation submitted by Lindsey Graham and Jason Chaffetz.

Earlier this week, Sen. Lindsey Graham (R-SC) and Rep. Jason Chaffetz (R-Utah) submitted two separate, yet seemingly identical, pieces of federal legislation – both of which call for the all forms of Internet gambling, sans fantasy betting and horse racing, to be prohibited. In response to their aggressive stance, the Safe and Secure Internet Gambling Initiative (SSIGI), a group of pro-Internet gambling advocates, released a statement detailing the false premises under which the bill was forged.

Represented by Michael Waxman, the SSIGI condemns the Restoration of America’s Wire Act bill, citing The idea that Congress could or would ban Internet gambling is ludicrous and down-right foolish. Waxman also points out that Americans are taking full advantage of the myriad of unregulated sites that have propped up in recent years, and implies that Americans would be far better off placing wagers in a more controlled, safeguarded environment.

The SSIGI argues that the Democratic Governors Association has already expressed “strong opposition to the bill” and that the decision as to whether Internet gambling should be legal should be left to state governments.

The Restoration of America’s Wire Act (RAWA) was reportedly forged by a Sheldon Adelson lobbyist. The casino mogul has not exactly held back his distaste for online gambling, evident by his recently launched anti-gambling venture, the Coalition to Stop Internet Gambling. In the release, the SSIGI indicates that Adelson has his own greed-driven agenda, based around his fear that a thriving Internet gambling industry would cannibalize brick and mortar casino revenues.

As for the RAWA itself, it calls for the rolling back of state regulated online gambling. To date, online gambling has gone live in three states (New Jersey, Nevada and Delaware) with legislation proposed in several others.

Last year, Reps. Pete King of New York and Michael Capuano of Massachusetts introduced legislature that would allow for the introduction of a standardized regulatory framework that would oversee all Internet gambling activities, while still granting individual states the power to decide whether or not to legalize online gambling. The bill was modeled after a piece of pre-Black Friday legislation that received bi-partisan approval from the House Committee.

The SSIGI stands firm in its belief that in the long-run federal intervention is needed to control Internet gambling activity. At the moment, state gaming enforcement committees concoct and oversee their own regulations. By implementing federally mandated guidelines, each state would be subject to a uniform rule-set, which in effect, would serve to stabilize the industry.

The release concludes by reiterating SSIGI’s position that government should not inhabit state freedoms by forcing a roll-back of an already burgeoning industry.