Overnight chip leader Charles Sylvestre won the WSOP Circuit Main Event at Casino Lac-Leamy so quickly that a whole day was knocked off the tournament schedule. 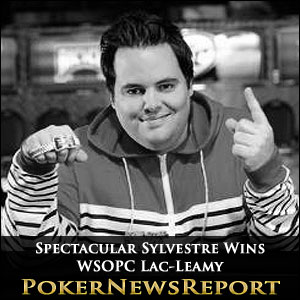 Overnight chip leader Charles Sylvestre won the WSOP Circuit Main Event at Casino Lac-Leamy so quickly that a whole day was knocked off the tournament schedule.

Eighteen players returned to the Casino Lac-Leamy on Saturday for what was originally intended to be Day 3 of the WSOPC Main Event. However, with the field having been reduced from 371 entries so quickly on Day 2, a “wait-and-see” approach was adopted to see if the tournament could be completed in one day.

At the start of play, Charles Sylvestre had double the number of chips than his closest rival after enjoying a superb Day 2, and he maintained a huge advantage all the way to the ten-handed final table – eliminating Robert Repaci en route in a classic 4♥ 4♠ > A♣ 3♠ coinflip. John Nelson and Sol Bergren had made some progress in pursuit of the runaway leader, but the player who had been in second place overnight – Mike Leah – suffered a setback in a three-way pot which eliminated Day 1 chip leader Jason Sagle and tripled-up Adam Podstawka.

Three Out Within the First Level

It had taken little over two hours for the final table to be set but, with blinds at 10,000/20,000 (ante 3,000), only Adam Podstawka was in the short stack zone of < 20 Big Blinds. Nonetheless, players fell quickly during the next hour – a sequence which started almost the moment the players took their seats when Vladimir Faubert shoved all-in from the cutoff with Q♥ Q♦ and ran straight into Charles Sylvestre´s K♥ K♦.

Mike Leah crippled John Pentefountas 5♣ 5♠ > A♣ K♣, and then finished the job with 6♠ 6♦ > 5♣ 3♠ in the next hand to send Pentefountas to the rail in ninth; and he was quickly followed by Adam Podstawka, whose Q♠ 8♣ failed to improve past Justin Dean´s K♥ Q♥. Prior to the end of the level Dinara Khaziyeva doubled up against Bryan Moon with trip Queens, and Charles Sylveste took his first major hit of the day when doubling up Sol Bergen 8♦ 8♣ > A♣ K♥.

Level 26 of the WSOPC Lac-Leamy Main Event was an up-and-down level for Charles Sylvestre. Soon after the game resumed following the dinner break, Sylvestre eliminated Bryan Moon K♠ 4♥ > 8♥ 7♥ and Justin Dean A♣ 10♠ > 9♣ 9♦ to increase his chip stack to 3.85 million out of the 7.4 million chips in play. However, he was soon to receive a couple of setbacks.

Mike Leah chipped up to over a million chips when taking a big pot from Sylvestre with A♥ A♦, and Dinara Khaziyeva took the chip leader for another ½ million chips in an Ace-high > King-high hand. Even when he did have the best hand, Charles Sylvestre was not getting paid off – turning Quad Sevens against Sol Bergren, who had been the aggressor throughout the hand, but who checked behind Sylvestre on the River when Sylvestre was hoping for a bet.

John Nelson temporarily took the chip lead in the climax to the WSOPC Lac-Leamy Main Event after busting out Mike Leah in fifth place A♥ A♣ > A♠ K♥ and flopping top pair in a 1.8 million chip pot against Sylvestre. Sylvestre regained the chip lead when hitting Trip Aces soon after the beginning of Level 27 (blinds 20,000/40,000 – ante 5,000) and then bust Sol Bergren in fourth A♠ Q♣ > A♥ 6♠ to extend his lead further.

However, John Nelson scooped the biggest pot of the tournament to date when Charles Sylvestre announced he was all-in after a flop of 7♠ 5♣ 4♦. Sylvestre turned over 2♣ 3♣ for an open-ended straight flush draw, but John Nelson showed 10♣ 9♣ for a higher flush draw. Both players missed the flush, as the board completed 7♥ 8♠, but John Nelson doubled-up courtesy of his higher pocket cards.

Nelson Extends Lead into Heads-Up but Loses to Failed Bluff

John Nelson extended his lead further when he bust the unfortunate Dinara Khaziyeva in third. Nelson had shoved all-in with A♥ Q♠, and Khaziyeva made the call with 10♠ 10♦. Dinara Khaziyeva was still ahead after the flop and Turn of 9♠ 4♥ 2♦ / K♦, but the A♠ spiked on the River to send the online qualifier out of tournament and give Nelson a 5.5 million -v- 2.2 million chip advantage going into the heads-up against Charles Sylvestre.

Despite the big chip disadvantage, Charles Sylvestre was the most aggressive player and he took the chip lead back when doubling up K♦ 4♥ > 4♦ 6♥ (after both players had paired their Four) and getting several shoves through uncontested to pick up the blinds and antes which were now 25,000/50,000 (ante 5,000).