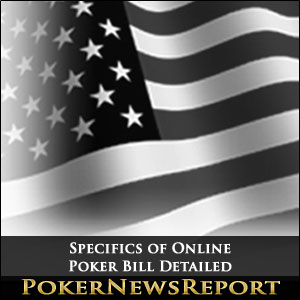 Barton remains highly optimistic that his federal colleagues will see the benefits of his proposed legislation and hopes that more support will be forthcoming. Citing movement already underway on the state level, the Texas Republican believes that Congress will not continue avoiding the issue.

While the measure will not find 100% support among Indian tribes thoughout the U.S., it is considered tribe-friendly in that it addresses a number of issues that had concerned tribes previously. One key element is respecting tribal sovereignty. Barton representatives reached out and worked closely with tribal leaders while drafting the Internet Poker Freedom Act of 2013.

Regarding the omission of credit cards as a payment processing option, Barton felt that limits should be in place to protect those players who go on tilt and attempt to win back lost money while not in the best state of mind. He likened the preferred situation to that of live poker-playing where running out of cash requires a trip to the ATM.

The measure’s bad actor statute that is considered lax in requiring a conviction to be denied participation in the federal plan was defended by the 73-year-old lawmaker. Stringent requirements by individual states would determine suitability for any applicants, including those deemed as violators of the UIGEA.

While HR2666 focuses on online poker, it does not preclude any of the states or tribes from also permitting online casino games or selling lottery tickets. This is quite favorable to those who hope to expand Internet gaming beyond just poker, but will likely keep the fervent anti-gambling legislators from jumping on board.

Barton continues plugging away to allow U.S. players the right to play regulated online poker nationwide. While this particular bill may not find favor among his brethren in Congress, the more the issue is proposed, the greater the likelihood that one day legislators will come around with the needed support.