Spanish poker players who enjoyed big wins over the past few years may want to come clean with the country’s tax authorities. 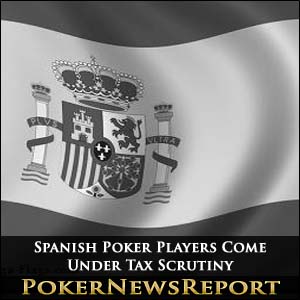 Spanish poker players who enjoyed big wins over the past few years may want to come clean with the country’s tax authorities.

According to reports, the tax office in Spain has started a probe to examine the play history and winnings of top poker players in the country.  Under Spanish tax law, these players have to report their winnings to the income tax office and also pay the taxes if the money exceeds a certain amount.

The tax authorities are apparently not leaving any stone unturned and will examine all sources as far back as 2010 to find out which players won big in live and online poker tournaments.  Using tournament results which are available to the public to view, the authorities are expected to match income tax statements made by players against their winning histories, and if any irregularities are found, action will be taken.

Alongside Spain’s liberal new gambling laws comes a much tougher tax platform in the hope that players will be as transparent and upfront about their winnings as demanded by law.  Last year, just before the Spanish government granted online gambling companies their licenses to operate in the newly regulated market, these groups were slapped with retroactive tax bills that totaled literally millions of dollars.

Poker players across Europe are being contacted by tax authorities who want part of their winnings from online poker and live poker tournaments.  Swedish players, for example, are being asked to pay for income made at sites, even if these poker rooms are not registered within the European Economic Area.

In addition, Italian authorities also launched a tax mission in 2011, where they discovered that local players had not declared tax on over $100 million in gambling winnings.  This swoop on Italian poker players, named “All In” by the authorities, led to a growing number of pros declaring their income last year, and Spain hopes that its latest action will yield similar results.