The Spanish Socialist Workers Party (Partido Socialista Obrero Español/PSOE) has announced plans that would seriously harm, if not kill, online poker in Spain. 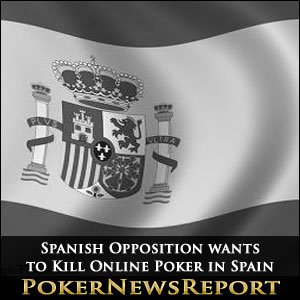 The Spanish Socialist Workers Party (Partido Socialista Obrero Español/PSOE) has announced plans that would seriously harm, if not kill, online poker in Spain.

At a time when revenue from online gambling in Spain is tumbling (down 20% from Q1 2013 to Q3 2013), the Spanish Socialist Workers Party – the party currently in opposition in the Spanish House of Representatives – has announced proposals that would effectively put an end to online poker in Spain.

Last November, the Partido Socialista Obrero Español (PSOE) caused uproar within the Spanish gaming community when it suggested that online poker players should pay tax on their gross profits rather than on net profits (i.e. paying tax on every winning hand without deducting losses from losing hands).

Justifying its proposals by saying that online poker encouraged an addictive behaviour with undesirable social effects, PSOE representatives frightened the life out of online poker players in Spain by saying that retrospective legislation would be introduced should the party return to power in elections scheduled to be held in Spain in 2015.

If the party´s November proposals were not enough to kill online poker in Spain, its latest round of suggestions definitely will. The socialist group has now launched an attack on the Responsible Gaming Strategy that was adopted in July 2013, and would now like to see:

Irrespective of whether the PSOE gets elected in next year´s elections (which is becoming more likely due to the current government being rocked by one corruption scandal after another), online poker players in Spain are suffering from being ring-fenced away from other European markets.

Carlos Hernandez, the newly-appointed Director General of the Spanish online gaming regulator DGOJ, has admitted to the Spanish poker press that launching a closed-liquidity market was a mistake, but he seems no closer to his goal of integrating the Spanish poker market with other regulated European countries.

Recent talks between European regulators in Rome appear to have focused on measures to deal with offshore online poker companies, while a recent ruling in France (currently run by the Socialist Party) blocked the possibility of shared liquidity with other nations – the French Committee on Economic Affairs describing online poker as an uncontrollable ogre eating one market after another.

Will Online Poker Companies Pull Out of Spain?

When online poker was regulated in Spain in 2012, a number of companies paid substantial retrospective taxes before being awarded with their licences, and many will be considering whether the investment was worthwhile.

The Ongame Network and multi-platform site Paf.com both pulled out of the Spanish market in 2013, while Bwin.Party paid €25.6 million in taxes to obtain their operating licence but only register a 7-day average of 100 cash game players according to online poker traffic reporting site PokerScout.com.

Limited liquidity is already suffocating poker players in Spain and the new proposals being suggested by the PSOE might just put online poker in Spain out of its misery for once and for all.

Maybe that would be the kindest thing to do!