With 96 countries vying for the title, Spain bested the field and took down the PokerStars World Cup of Poker (WCP) over the weekend. 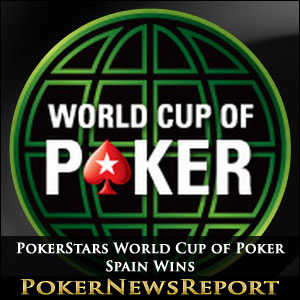 With 96 countries vying for the title, Spain bested the field and took down the PokerStars World Cup of Poker (WCP) over the weekend.

It was the tenth annual running of the event, but the first in which the entire series was played online — and for play-money chips. Since 2009, the WCP finals were played in the Bahamas as part of the PokerStars Caribbean Adventure (PCA), which is held every January.

Also for the last five years, the 1st place prize was a whopping $200,000. But this year, ‘minnie2354’ from Spain had to be content with a prize pool of 200 million in play chips for winning the World Cup for his or her country.

Why the change in format? No official announcement was ever offered, but rumors were flying throughout the industry that PokerStars had been planning on playing the WCP final in New Jersey after receiving approval for an online gambling license from state gaming regulators.

As most are aware, that approval has yet to be rubber-stamped by the Division of Gaming Enforcement, putting an end to those plans and forcing PokerStars to play their hand a bit differently. The result was a play-money, all-online format that saw Canada’s ‘scottycel’ finish as runner-up.

World Cup action began on November 22 with the U.S. also represented after having been shut out from competition the last few years following Black Friday. But the American flag was nowhere to be seen during the finals over the weekend, as only Italy (4th place), Kazakhstan (3rd place), Canada and Spain remained.

The rules allowed players from countries still alive to enter at any stage of the WCP tournament series as long as their nation had not been eliminated and those players desiring to compete put up the required play-money buy-in. A total of 140 players did that for Saturday’s final, each buying in for 100,000 in play chips.

Only 38 of those players were Spaniards, putting the country at a more than 3 to 1 disadvantage versus their Canadian rivals. But the play-money players from Spain were able to overcome the deficit, resulting in a showdown between ‘minnie2354’ and ‘scottycel.’

The heads-up battle waged by those two lasted only 20 hands when Canada raised big pre-flop with king-queen. Spain held ace-ten and shoved all-in. A call by ‘scottycel’ would assure the hand be played out, and a ten on the board paired ‘minnie2354’ for the victory.

Congratulations to ‘minnie2354’ and Spain for winning the PokerStars World Cup of Poker! Sixty-four million in play chips went to the champion, while the runner-up grabbed 38 million for finishing second.

I’m sure I’m not alone in hoping that the 11th running of the WCP will again transition to real-money prizes for the winners. And to be held live on American soil would also be a welcome sight!