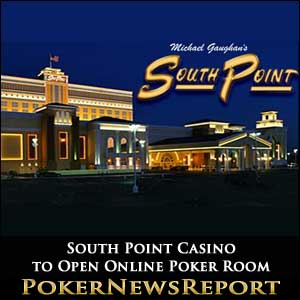 About a week or two ago, 2006 World Series of Poker Main Event Champion Jamie Gold decided to open a free online poker room which players would not have to pay anything to be a part of, not even a membership fee.  Gold won’t be the only one making this move, as Michael Gaughan, who currently owns South Point Hotel, Casino, and Spa in Las Vegas, will be launching a very similar online poker site soon.

The site will most likely be named after South Point Casino, and will be run under the same network as FreeGoldPoker.com, which is the ZEN Entertainment Network.

The ZEN Entertainment Network originally started back in 2006 when the National League of Poker (NLOP) was first made, and since then ZEN has actually bought NLOP.com, and has help the site continue to expand.  The idea behind the ZEN Entertainment sites, is that they offer players real money, and tons of prizes, but they charge nothing to be a part of. These online poker sites will essentially make their money through advertising revenues, and multiple different sponsorships.  ZEN has also recently created CardPlayerPoker.com, and purchased SpadeClub.com last year.

As far as the creator of the site goes, Gaughan has been in the gaming business for an incredibly long time, dating back to 1965 when he jumped on as the casino manager and owner of the El Cortez Hotel.  He has changed locations quite a few times, and even founded Coast Casinos, Inc; which then built its first property, the Barbary Coast Hotel.  He then opened up hotels such as the Orleans Hotel, the Saint Louis Casino Queen Riverboat, the Gold Coast Hotel, the Suncoast Hotel, and the Suncoast Hotel and Casino.  He decided to sell Coast Casinos to Boyd Gaming back in 2004, but took ownership of the South Coast Hotel and Casino; which today is known as the South Point Casino, and could soon be the name of a brand new online poker room in the United States.  South Point has had its name in the lights a few times in recent history, as they hosted both High Stakes Poker, and Poker After Dark there.