Just sixteen players remain after Day 4 of the EPT Deauville Main Event, with the race to the final table being led by Greek poker player Sotirios Koutoupas. 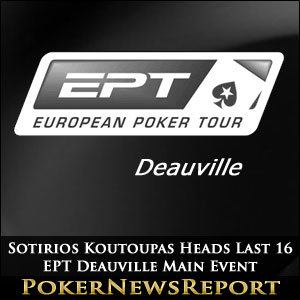 Just sixteen players remain after Day 4 of the EPT Deauville Main Event, with the race to the final table being led by Greek poker player Sotirios Koutoupas.

Day 4 of the EPT Deauville Main Event promised to be a short day, and it was. Only 4½ levels were required yesterday to reduce the forty-one players who returned to the Barriere Casino in Deauville to a field of sixteen – although that did not mean there was a lack of action.

From the time that the cards were in the air, brave calls, bad bluffs and big breaks changed the complexion of the tournament – and increased the intensity of the players in pursuit of the €614,000 first prize – and almost immediately we had a new chip leader.

We predicted in yesterday´s PokerNewsReport that “sartorial” Day 3 chip leader Ekrem Sanioglu would not have an easy time yesterday drawn on the same table as JP Kelly and Dmitri Holdeew, and so it proved. In one of the first hands of the day, Sanioglu (Q♠ 10♦) tried to bluff Kelly (A♦ Q♥) out of a valuable pot, but Kelly was having none of it and took the pot down with just Ace-high.

While Ekrem Sanioglu´s chip stack had been in decline, the fortunes of Sotirios Koutoupas had been going in the opposite direction. A brave call with Q♠ 2♠ following the flop of 8♣ Q♦ 3♠ saw him eliminate Michel Pomaret (A♠ K♦) in thirty-ninth place, and a little good fortune saw him river a straight to send Gheorghe Gradinaru to the rail in twenty-ninth place A♦ Q♥ > A♣ K♣ after a flop of K♦ 10♦ K♥.

Tatu Maenpaa also enjoyed some good fortune to temporarily take the chip lead in the EPT Deauville Main Event – shoving all-in with K♥ Q♥ on the flop of 3♣ 6♥ 4♥, receiving a call from Robert Szecsi (A♥ A♠), hitting the 3♥ on the Turn to complete his flush draw, and avoiding another Heart, a Three or an Ace on the River that would have saved Szecsi from elimination.

Koutoupas Hits the Top as Sweeney Calls it Right

The hand that put Sotirios Koutoupas at the top of the leaderboard was quite astonishing in as much as his opponent – Andrew Sweeney – correctly predicted Koutoupas´ hand, had the cards to beat it, yet folded. With the board showing 9♥ 9♠ 5♥ / 5♦ / 6♥ and 576,000 chips already in the pot, Sotirios Koutoupas moved forward 500,000 chips that would have put Andrew Sweeney all-in had he called. With a big pay jump looming, Sweeney declined to make the call, suggesting that Koutoupas had a pair of Threes that had been counterfeited by the two pairs on the board. Sweeney folded and mucked his Ace-high hand, before Koutoupas rolled over 3♦ 3♥!

The restraint that Andrew Sweeney had shown against Sotirios Koutoupas was rewarded soon after when he doubled up against Tatu Maenpaa A♥ J♦ > 10♥ 10♠, but he was eventually knocked out in eighteen place when he ran his 9♠ 9♦ into Maenpaa´s A♦ A♥ and failed to find the two-outer he needed to survive.

Lucky Law Mixes it Up to Lay Second Overnight

Possibly the best of the day´s good fortune was reserved for UK poker player Chun Ho Law. Ho Law´s stack had been reduced to less than 300,000 chips before he staged a recovery that would see him rise into second place on the leaderboard overnight. His rise up the rankings started when he got all-in with 10♦ 8♦ against Rustem Muratov´s A♦ J♣ and flopped a Ten to double up, and his luck improved from thereafter.

Ho Law bust Jose Carlos Garcia in twenty-fifth place A♠ 9♣ > A♦ 8♣ after Garcia had missed a sack-full of outs, doubled-up against Alex Goulder K♠ K♦ > A♣ Q♣ and eliminated Mustapha Amaouche 4♥ 4♣ > A♦ 8♥ after Amaouche had turned trip Aces, but Ho Law rivered the 4♠ to make a Full House. Chun Ho Law finished the day by catching the flopping the K♠ to send Konstantin Tolokno to the rail in seventeenth (A♥ K♣ > 7♥ 7♣) and bring a close to the day´s proceedings.

Looking Ahead to Day 5 of the EPT Deauville Main Event

Day 5 of the EPT Deauville Main Event will see the sixteen remaining players reduced to a final table of eight that will be played out on Saturday. When the remaining players take their seats at the Barriere Casino in Deauville this afternoon, there will be around 40 minutes remaining in Level 24 (blinds 12,000/24,000 – ante 3,000) with the next player out assured of €27,680.

Of the sixteen players that remain, only six have fewer than one million chips, with the shortest stacked player – Bahram Chobineh (327,000 chips) – having a sufficiently large stack that he can wait for an orbit or two before having to make a move. Those with chip stacks in excess of a million chips are;