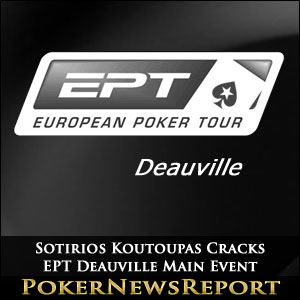 After five days of action in the EPT Deauville Main Event, there was a high probability that history was going to be made at the final table. Chip leader Sotirios Koutoupas was aiming to become the first poker player from Greece to win an EPT Main Event, PokerStars professional Eugene Katchalov was looking for an EPT victory to complete his Triple Crown (WSOP/WPT/EPT), and Carlo De Benedittis was hoping to turn his €20.00 satellite entry into a Moneymaker-esque €614,000 payday.

However, once the eight players took their seats at the final table, the law of probability was turned on its head; and some odds-busting hands were responsible for the departure of some shell-shocked players, while the victors often could not believe their amazing good fortune. This is how the relative chip stacks looked at the start of play:

The start of the final table was very tentative and saw players taking down the blinds and antes (blinds 20,000/40,000 – ante 5,000) with some relatively small pre-flop raises. During the early (lack of) action, players were nervously folding hands in which they would have been ahead; and followers on the live feed saw Carlo De Benedittis fold A♥ J♠ when faced with a min-raise by Sotirios Koutoupas (K♠ Q♠), Oliver Price fold K♠ Q♠ when Koutoupas had raised with K♣ 10♥ and Eli Heath (Q♣ 5♣) snap-fold when Rustem Muratov moved all-in with J♥ 10♥.

In comparison to the subdued opening level, the game dramatically burst into life as the blinds rose. Sotirios Koutoupas (K♦ Q♦) raised to 105,000 chips from UTG +1 and Anthony Lerust in the Small Blind shoved all-in with A♣ A♠. Koutoupas called the bet and the two players saw the flop of 9♠ 10♣ 8♣ – giving Koutoupas outs to a gutshot straight.

The K♥ on the Turn increased the number of outs available to Koutoupas, and he cracked Lerust´s Aces – and eliminated the last French player standing – when the Q♣ on the River gave him two pairs. As Anthony Lerust left the final, most of the rail lost interest in the tournament and followed the disappointed Frenchman out into the cold Deauville air.

De Benedittis Eliminated in the Next Hand – Muratov Crippled and Out

It only took one more hand to reduce the final table of the EPT Deauville Main Event to six players. Carlos De Benedittis saw the opportunity to get all his chips in the middle with A♦ 10♦ and Oliver price made the call with A♥ Q♠. The all-black flop of K♠ 7♠ J♣ meant that if either player had caught their kicker it would have given the other an Ace-high straight, but the Turn (3♣) and River (3♠) delivered a pair of Threes and De Benedittis was eliminated in seventh place.

Rustem Muratov had improved his position slightly when getting a post-flop shove past Eli Heath with just Jack-high, but after Heath had reduced Oliver Price to short-stack in a Q♠ J♠ > K♠ Q♥ hand, Muratov tried one shove too many with 5♥ 5♣, and Price doubled-up when his Q♠ Q♣ held against the Russian. Reduced to 10,000 chips, Muratov (6♦ 5♥) got them all-in two hands later, and was bust in sixth place when Oliver Price (A♦ 8♦) Turned trip Eights.

Katchelov Looking Down but Heading Up

Going into Level 28 (blinds 30,000/60,000 – ante 5,000) three English players remained among the five competitors – Harry Law, Eli Heath and Oliver Price – with Sotirios Koutoupas still leading the field and Eugene Katchalov the short-stack after losing a lot of chips against Oliver Price in the hand that bust Rustem Muratov – Katchalov (K♦ 10♠) having had top pair on the Ten-high board against Price´s trip Eights.

However, through Level 29 (blinds 40,000/80,000 – ante 5,000) the dynamics of the event changed as Eugene Katchalov doubled through Harry Law 10♥ 10♠ > A♠ J♦ and then took a 500,000 chip pot from Sotirios Koutoupas with Ace-high against Koutoupas´ paired Seven. From being the short-stack of the five remaining players, Katchalov moved into second place in the EPT Deauville Main Event and was to eventually contest the heads-up against Sotirios Koutoupas after the Greek player´s incredible hat-trick of KO´s against the three remaining Brits.

Koutoupas Scores a Hat-Trick Against the English

Sotirios Koutoupas´ hat-trick came either side of the start of Level 30 (blinds 50,000/100,000 – ante 10,000). Harry Law was to be his first victim – getting all his chips into the middle with A♦ A♣ after Koutoupas had five-bet shoved all-in against the Londoner with A♥ K♥. Law was an 87% favourite to win the hand before the flop of 5♥ 6♥ 7♥, and a 2% outsider afterwards. Law has drawing dead after the Turn of 3♠ and was already leaving the table in fifth place when the 9♠ was dealt on the River.

Eli Heath was also a strong favourite to win the hand he was eliminated with – getting all his chips into the middle with A♠ 8♣ and receiving a call from Koutoupas, who had K♥ J♠. Again the flop turned the odds on their head when the J♦ 10♦ Q♠ hit the board, and without a King to save him from elimination on the Turn (7♦) or River (3♥), Heath was bust in fourth place.

Oliver Price´s elimination was far more conventional. Price moved all-in with K♠ 9♣ from the Big Blind and Koutoupas (K♦ Q♠) made the call. The Q♣ on the flop of Q♣ 7♠ 6♦ put Koutoupas firmly ahead in the hand, but the 8♥ on the Turn presented the scenario that the odds would be turned over again if Price hit a Five or Ten. Unfortunately for Price, the dealer spun over the 9♦ and he was sent to the rail in third place.

The heads-up lasted little more than an hour despite Sotirios Koutoupas going into the climax of the EPT Deauville with a 15.050 million -v- 4.990 million chip advantage against Eugene Katchalov. Katchalov started brightly – closing the gap between the two players to 5 million chips when hitting a Full House with A♠ 8♣ against Koutoupas´ attempted bluff, and forcing the Greek out of a pot pre-flop with A♣ A♦. Sotirios Koutoupas redressed the balance when his A♦ 7♥ turned trip Sevens, and it was also Trips that won him the EPT Deauville Main Event – again against the odds.

Koutoupas was the aggressor in the final hand – opening with a raise to 200,000 chips from the button. Katchalov raised to 500,000, and Koutoupas responded by moving all-in. Katchelov called immediately and the cards were on their backs:

The odds could not have changed more dramatically after the flop of 3♦ 3♥ 5♣, and now Koutoupas was a 97% favourite to win the hand having flopped Trip Threes. There was a potential sting in the tail as the 2♥ on the Turn gave Katchelov the chance of a gutshot straight; however it was not to be, as the Q♥ on the River did not change the outcome of the hand and Sotirios Koutoupas became the EPT Deauville Main Event champion.