The 7th running of the Party Poker Premier League was played this week at the Playground Casino in Montreal, with Sorel Mizzi emerging as the League Champion. 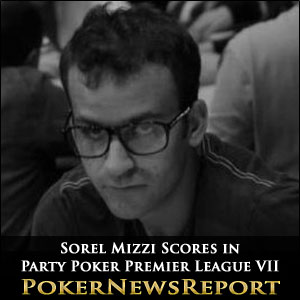 The 7th running of the Party Poker Premier League was played this week at the Playground Casino in Montreal, with Sorel Mizzi emerging as the League Champion.

Twelve of the world´s best poker players participated in the $125,000 buy-in Party Poker Premier League this week – a quite complicated event in which every player wins a prize depending on the points they accumulate during the “heats” and where they finish in the league “final”.

Six eight-handed heats were played – so each player got to play in four of them – with between 0 and 14 points being awarded to each player depending on how they performed in each heat. The top four players when the heats were finished would automatically qualify for the six-handed league final, while the next four players in the table would play each other heads-up for the final two seats.

A win and two second place finishes enabled Jeff Gross to take the early lead on the league table, and he was joined at the top by the winners of Heat 4 (Dan Coleman) and Heat 5 (Brian Rast), while Sorrel Mizzi also qualified automatically due to a consistent performance throughout. After the final heat had been played, the league standing looked like this:

The four players at the top of the league table were joined by Jason Koon and Scott Seiver, who beat Daniel Cates and Jonathan Duhamel respectively in their heads-up deciders to complete the six-handed league final table.

Brian Rast was unfortunate to be eliminated in sixth place, when dominating Dan Coleman K♥ K♠ -v- A♠ K♣ when all their chips went into the middle pre-flop. The board ran Q♣ 10♥ 8♣ / 4♣ / 10♣ to give Coleman a backdoor flush and send Rast to the rail.

A couple of hands later and Scott Seiver moved all-in on the flop of A♦ 10♦ 9♣ with A♠ 7♣ and was snap-called by Dan Coleman who was holding 10♠ 10♣. With no miracle cards on the Turn or River to save Seiver, he was sent to the rail in fourth place.

Despite his two knock-outs, Dan Coleman was quickly reduced to the short-stack of the three remaining players and he got the last of his chips in with K♥ 10♠. Unfortunately for Coleman, Sorel Mizzi had woken up with K♠ K♦ and Coleman was eliminated in third.

Mizzi More than a Little Lucky in Heads-Up

Sorel Mizzi took a 1.807 million -v- 210,000 chip advantage into the heads-up against Jeff Gross but – despite his big lead – could not finish Gross off and, after a handful of double-ups, Jeff Gross actually took the lead.

Mizzi was lucky to avoid defeat when his 9♦ 7♦ were behind Gross´ flopped top pair top kicker, but his turned a gutshot straight to cripple Gross and soon after the cards were on their backs for the final hand of the event:

How to Work Out the Prize Money

All the players – whether they were involved in the league final or not – were awarded $2,000 for each of the points they won in the heats, plus all six players in the final were rewarded with a cash prize. Therefore Sorel Mizzi picked up $66,000 for the 33 points he won in the heats, plus a further $400,000 for winning the league final. The rest of the payouts went like this: