The final bracelet event in the current WSOPE series got underway yesterday – the High Rollers Event – with Sorel Mizzi leading the way at the end of Day 1. 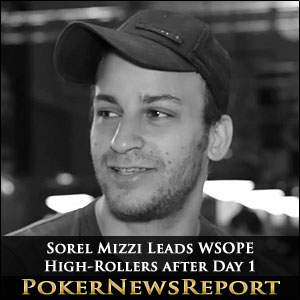 The final bracelet event in the current WSOPE series got underway yesterday – the High Rollers Event – with Sorel Mizzi leading the way at the end of Day 1.

As the WSOPE Main Event was heading towards its conclusion, the three-day High-Rollers Event got underway yesterday; with seventy-five players ponying up the €25,600 buy-in to endure a rather dull day due to the uninspiring blind structure, and the fact that each player was given a ridiculously large stack of chips to start with (75,000!).

At the end of Day 1, Sorel Mizzi was one of only three players who had trebled their starting stack – bagging up 268,800 chips courtesy of a three-handed pot in which Mizzi had A♥ A♦ against the K♠ K♦ of Martin Jacobsen and the K♣ Q♣ of Vasily Kurdin. The board ran 6♠ A♣ 3♣ / J♦ / J♥ to chip Mizzi up into a substantial lead which he did not relinquish.

Seiver and Esfandiari Chip Up with Trip Nines

The two other players to treble their chip stacks through six dour 60-minute levels were Scott Seiver and Antonio Esfandiari – and both had Nines to thank for their major pots. Scott Seiver (K♣ 9♥) crippled Jason Mann after flopping trip Nines and getting three streets of value, but Antonio Esfandiari (A♠ 9♦) had to wait until the Turn (9♣) and River (9♠) to complete his trips and cripple Noah Schwartz.

Further back down the leaderboard, Phil Ivey (182,800 chips) and Jason Mercier (163,500 chips) both had satisfactory opening shifts, while Daniel Negreanu – fresh from finishing 25th in the WSOPE Main Event – recovered from doubling up Davidi Kitai 7♥ 7♠ > J♣ J♥ in the first hand he sat down to, to finish the day with 161,600 chips.

Day 2 of the WSOPE High Rollers promises to be a very long day. Only thirteen players were eliminated yesterday (leaving 62 still in the tournament) and late registration remains open until the end of Level 12 today. Consequently play on Day 2 will begin at 1.00pm local time (rather than 3.00pm indicated in the schedule) and the organisers will decide later when play is going to stop for the night – rather than keeping to the plan of playing down to a final table.

When the WSOPE High Rollers event resumes this afternoon, players will be entering Level 7 (blinds 500/1,000 – ante 100) and hopefully the proceedings will be a little more entertaining than yesterday – especially as Phil Hellmuth is expected to make his usual last-minute entrance (hope you know the starting time has changed Phil!). There is also the race for WSOP Player of the Year to be decided, with Matt Ashton currently heading Daniel Negreanu, and the possibility that the game will continue throughout the night in order that it concludes within three days!