Sorel Mizzi may be leading the final eight players in the Guangdong Asia Millions but, because of the crazy blinds in this event, everybody is short-stacked! 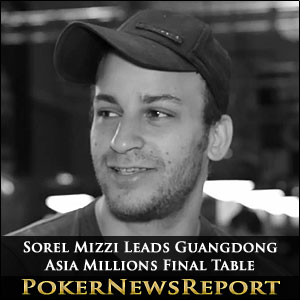 Sorel Mizzi may be leading the final eight players in the Guangdong Asia Millions but, because of the crazy blinds in this event, everybody is short-stacked!

Forget Las Vegas. Forget Wembley. The biggest poker tournament this week is the Guangdong Asia Millions at the PokerStars City of Dreams in Macau. Eight players remain in the event, in which the first player out is assured of $774,000 (more than Jakub Michalak collected for winning the ISPT Wembley) while the last man standing will collect a staggering $4.464 million (more than the combined value of the WSOP ‘Millionaire Maker’ final table payouts).

Sorrel Mizzi leads the way with the biggest stack of chips in front of him (28.2 million) but, with blinds starting at 500,000/1,000,000 (ante 10,000) when play resumes at the PokerStars City of Dreams later today, anybody who wins a flip early in the proceedings could easily go on to take down the life-changing first prize. The average stack is just thirteen big blinds:-

Seventy-one players ponied up the HK$1 million buy-in to the event (around $130,000 in Yankee dollars) with 54 of them having the small change in their pocket to re-enter, re-load or top up during the re-buy period. A total prize pool of HK $119,375,000 was created (about $15.4 million), making the Guangdong Asia Millions the most valuable open poker tournament ever to be played outside of a World Series of Poker Main Event.

Most of the players comprised of (very) wealthy business men who fancied a game of poker, local stars who had been staked by the afore-mentioned very wealthy businessmen, and a few sharks who had swum across the Pacific to try to relieve some of the very wealthy businessmen of their money. Among the also-rans (those who failed to make it to the final table) were Jonathan Duhamel, Greg Merson, John Juanda, Gus Hansen, Aaron Lim, ElkY Grospellier, Mike McDonald and Tobias Reinkemeier – names that would grace any poker event in the world!