Part time German poker player Soenke Jahn fought through the competition, the chaos and the confusion to win the Estrellas Poker Tour Main Event in Barcelona 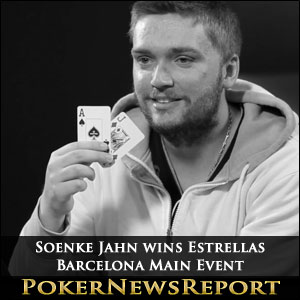 Part time German poker player Soenke Jahn fought through the competition, the chaos and the confusion to win the Estrellas Poker Tour Main Event in Barcelona.

Jahn, whose only previously recorded cash in a live poker tournament was in a side event at the Eureka Poker Tour in Rozvadov earlier this year, would have won the most valuable prize ever awarded for a €1,000 buy-in event outside of the WSOP had it not been for a final table deal.

The German had to overcome a tough eight-handed table of experienced poker players from all over Europe, and also had to content with a partisan rail supporting local player Marc Pujol and adopted Catalan Paul Cusi (who actually comes from Valencia).

Furthermore, Jahn also had to keep his focus on his game while the Hotel Arts was filled once again with hundreds of competitors for the first day of the EPT Barcelona Main Event and while the conclusion of the EPT Super High Rollers was being battled out.

Going into the climax of the Estrellas Poker Tour Main Event, the field was lead by UK poker player Paul vas Nunes who enjoyed an exceptional finish on Day 3 – doubling up against Paul Cusi (K♣ 5♥ > J♦ J♣) and then eliminating Igor Yaroshevskyy (A♥ Q♥ > 2♦ 2♥) in consecutive hands to create the final table.

As players took their seats at the final table, there were a few minutes left in Level 30 (blinds 60,000/120,000 – ante 20,000) with five of the eight remaining players having less than 20 Big Blinds and facing some tough early decisions.

The shortest of the short stacks enjoyed mixed fortunes at the start of the ESPT Barcelona final table. An unanswered first hand shove by Marc Pujol and a double up A♠ A♦ > A♥ Q♣ against Jahn Soenke saw him chip up over the 2 million chip mark just as Level 31 was beginning (blinds 80,000/160,000 – ante 20,000).

The poker Gods were not so kind to Alfonso Amendola, who shoved from the Big Blind with Q♦ 8♦, found two Diamonds on the flop of 4♠ 7♦ 2♦, but could not improve past the A♠ 4♦ of Paul Cusi and was the first player to leave the table in eighth.

With four of the remaining seven players choosing their spots very carefully, much of the action over the next two levels concerned the three chip leaders – Paul vas Nunes, Paul Cusi and Jahn Soenke, who had recovered from Marc Pujol hand earlier by taking two big pots against Nunes to chip back up into contention.

Nunes was joined at the top of the leaderboard by Cusi, when Cusi eliminated Lukasz Roczniak in seventh (A♣ K♣ > A♦ Q♠), but Cusi lost a 2 million pot to Soenke (Q♦ Q♠ > A♠ 3♥) and then another 2 million to Nunes when the player from Guildford rivered a Diamond Flush.

Cusi Out as Sameeian Starts to Rise

Two eventful hands saw the exit of Paul Cusi in sixth. In the first he called Marc Pujol´s shove with pocket Threes with his own pocket Eights, but the 3♣ on the flop enabled Pujol to double up, and then he moved all-in for his last 2 million with A♠ 3♦ and was called by Paul vas Nunes who was holding A♦ 8♠. The 8♥ on the flop sealed the Valencian´s fate and he was bust from the final table in sixth.

Meanwhile Alin Sameeian had been choosing his spots well and quietly chipped up into contention. Although lucky to survive an all-in against Paul vas Nunes A♠ J♥ > A♥ K♦ when pairing his Jack in the Turn, Sameeian flirted with the chip lead after forcing Marcelo da Fonseca out of a million chip pot and relieving Nunes of another half million chips with some aggressive betting on the river.

Pujol´s Runs Comes to an End as Luck Deserts Him

Marc Pujol was incredibly unlucky to be bust from the Estrellas Barcelona Main Event in fifth after calling Paul vas Nunes´ check-shove on the flop of K♥ 5♥ 6♠. Pujol (J♦ J♣) was well ahead of Nunes (Q♦ 6♣) when the cards were on their backs, but the 6♥ on the River gave Nunes trips and Pujol was sent to the rail where he was consoled by the huge army of supporters that had gathered.

Jahn Soenke – who was second in chips as four-handed play started – took a massive chip advantage with the immediate elimination of Alin Sameeian in fourth (K♣ Q♣ > 9♠ 10♠), and Paul vas Nunes (A♥ 6♠) joined him in the heads-up when rivering the 6♥ to best Marcelo da Fonseca´s 3♣ 3♥.

The conclusion of the Estrellas Barcelona Main Event lasted just one hand – Soenke raised from the button with A♦ J♠ and Nunes (A♣ 5♣) announced he was all-in. Soenke made the call and paired his Jack on the flop. However, Nunes was one card away from completing his Flush – but the 9♠ on the River was the wrong suit and Jahn Soenke was ESPT Barcelona champion.

When organizers had finished counting the entries to the ESPT Barcelona (around about lunchtime yesterday) 1,798 players had either qualified online at PokerStars or ponied up the €1,100 buy-in; making the event the largest live tournament ever hosted by PokerStars, but falling a little short of the 1,821 players that contested the GukPT Goliath in August – a new record for a European live poker event.