Erik Soderholm leads 396 players into Day 2 of the Eureka Poker Tour Main Event in Prague – the biggest live poker event ever to be staged in the Czech capital. 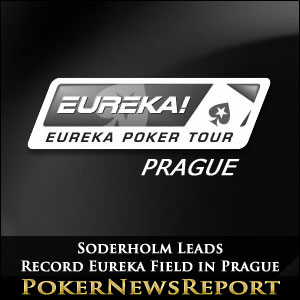 Erik Soderholm leads 396 players into Day 2 of the Eureka Poker Tour Main Event in Prague – the biggest live poker event ever to be staged in the Czech capital.

More PokerStars-related records tumbled yesterday, as 949 players competed in Day 1B of the Eureka Poker Tour Main Event in Prague, bringing the combined total for the two opening flights to 1,315 – by a mile the biggest poker tournament ever to be staged in the Czech capital.

Leading the 396 survivors of the two opening flights is Erik Soderholm; who bagged and tagged 264,600 chips at the end of ten levels of play to hold a narrow chip lead over Jean-Yves Mallat (246,500 chips) and Team PokerStars Pro Marcin Horecki (237,300 chips).

Stars Out in Force for Prague Festival

With several other significant poker tournaments scheduled over the next couple of weeks (the Grand Live Main Event starts today, the EPT Prague starts on Thursday and the WPT Prague gets underway on Sunday), there were plenty of famous names competing at the tables in the Prague Hilton.

Chris Moorman (153,100 chips) finished Day 1B just outside the combined top chip counts below, and he will be joined at the tables today by the likes of UKIPT Marbella winner Ludovic Geilich (149,700 chips) and defending Eureka Prague champion Menikos Panagiotou (105,800 chips).

Unfortunately, PokerStars-sponsored pros Mickey Petersen, Dale Philip and Juan Manuel Pastor all busted out early from the Eureka Prague Main Event, and they will likely be leaping into the EPT side events along with Shannon Shorr, Jason Wheeler, Steve O´Dwyer, Max Silver and David Vamplew, who also failed to make it through to Day 2.

Looking Ahead to Day 2 of the Eureka Prague Main Event

When Day 2 of the Eureka Prague Main Event gets underway, the 396 players will be entering Level 11 (blinds 800/1,600 – ante 200). The tournament is scheduled to play its final table on Thursday, so there may be an extension to the ten levels planned for today due to the volume of players still in the tournament.

Prizes for the €1,100 buy-in event have not yet been announced, but it is likely that the top 144 players will cash in the tournament and therefore the money bubble could burst sometime late tonight. Those with the best chance of still being involved in the action when the prizes get handed out include:

After registration had closed for Day 1B of the final event for the Eureka Poker Tour Season 3, the dates were announced for three stops on the tour for Season 4.

Eureka Vienna – 19th – 23rd March, 2014. Eureka Vienna will take place immediately before the EPT Vienna and satellite qualifiers for this event will be launched on PokerStars in early January.

Eureka Prague – The dates for this event have not yet been confirmed, but the Main Event is likely to again precede the EPT Prague in December 2014.