Wim de Graaf completed a remarkable victory to collect the winner´s prize of €11,820 – but only after he had stepped outside the Holland Casino for a cigarette! 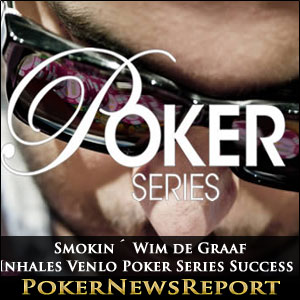 Wim de Graaf completed a remarkable victory to collect the winner´s prize of €11,820 – but only after he had stepped outside the Holland Casino for a cigarette!

When the final table of the Venlo Poker Series Event #1 got underway, it was hard to imagine anybody outside of the top three chips counts winning the tournament. Overnight chip leader Kees Aerts (207,100 chips) had an eight big blind chip advantage over A.B. (187,000 chips), with John Turner (110,500 chips) thirty-one big blinds back in third.

None of the remaining seven players had more than twenty-five big blinds at the start of play; but during the early levels of the final table, practically everybody who put their tournament life on the line survived to double-up – changing the whole nature of the event.

On Day 1 of the tournament everything Kees Aerts did turned to gold (with the exception of one bad beat). However, at the final table nothing would go his way. Aerts doubled up Ken Oberliessen A♦ 6♣ > 8♣ 8♦ in one of the first hands of the day, and pocket snowmen were again his downfall when doubling up Tito Schmitz J♥ J♦ > 8♣ 8♠ soon after.

A.B. became the chip leader by default following Aerts´ dual losses, and he extended his chip stack to 250,000 chips when Turning a pair of Tens (A♣ 10♠) to return Ken Oberliessen to his starting stack – however, A.B.’s reign at the top of the leaderboard was short-lived and, after Top Finisher #3 had doubled up against John Turner Q♠ Q♥ > 8♠ 8♦, Top Finisher #3 decimated A.B.’s stack with a flopped set of Aces (A♥ A♦) > A.B.’s flopped two pair (A♠ Q♣).

Only one player was to depart the final table of the Venlo Poker Series Event #1 during the early action – Kees Aerts recovering some of his early losses when busting out Kristian van de Velde in tenth place 6♥ 6♠ > A♥ K♥ – but Aerts was soon again on the receiving end of some brutal cards, and he doubled up Ken Oberliessen once again when Oberliessen´s K♥ 7♥ rivered trip Sevens.

It was four full levels until we saw the second elimination from the final table – Wim de Graaf, who had just doubled-up against Top Finisher #3 K♠ K♦ > A♠ Q♥, busting Tito Schmitz in ninth place A♦ Q♠ > A♣ 8♥ – but, as the blinds rose to 4,000/8,000 (ante 1,000) and the value of the average stack fell to just thirteen big blinds, the game suddenly burst into life.

Oberliessen Starts the Race to the Exit

Ken Oberliessen fell in eighth place after doubling up Andre van de Venne K♦ Q♠ > 9♣ 9♥ and losing the last of his chips to A.B. K♦ Q♥ > 10♣ 7♠: however, Van de Venne´s chip stack went across the table to Wim de Graaf when de Graaf paired his A♥ J♠ on the flop to best Van de Venne´s pocket Tens and eliminate the local player in seventh place.

Then it was the turn of the three overnight chip leaders to depart – A.B. falling to Tim Josten´s rivered pair of Threes, Kees Aerts being incredibly unfortunate to be eliminated by Top Finisher #3´s rivered Straight, and John Turner picking the wrong moment to try to bluff Wim de Graaf off of a flop of 9♦ A♥ 9♥ with K♠ Q♣ – de Graaf calling Turner´s shove with 9♠ 9♣ for Quad Nines!

De Graaf´s “Straight Out” for a Cigarette

Going into three-handed play, Wim de Graaf now had around 65% of the chips in play, and consequently he took a near 2:1 chip advantage into the heads-up against Tim Josten, after Josten had eliminated Top Finisher #3 in third place A♥ Q♠ > A♠ 7♥. However, it took nearly an hour for the “Wim -v- Tim” heads-up battle to conclude, and even when it did, Wim de Graaf had to be told that he had won.

In the final hand, Tim Josten shoved from the button and Wim de Graaf made the call:

The flop of A♣ J♥ 6♣ was of no use to Josten, and the 10♠ completed de Graaf´s straight. However, de Graaf did not realise that he had made the straight and when the 9♥ landed on the River, he believed he had just doubled-up Josten. Once told he had won Event #1 of the Venlo Poker Series, he let out a mighty roar and raced outside for a cigarette – delaying the presentation of his winner´s cheque for €11,820.