Small Signs of Life in the Durrrr Challenge 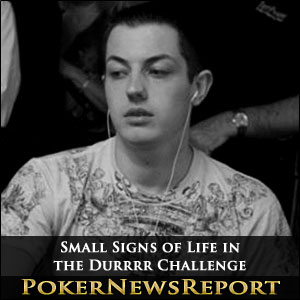 It’s been nearly three years since Daniel Cates took the durrrr Challenge. In that time the two have played a mere 20,000 out of the 50,000 hands required for completion. Black Friday and Full Tilt’s inability to pay back its customers certainly didn’t help matters, but still, it was time to get things moving.

And that’s exactly what the two top online pros did, or at least attempted to do, late last week. In what amounted to a 168 hand of $200/$400 NLHE, Dan Cates would win a relatively insignificant $20,000 from the brash, young superstar. An undisclosed issue – likely a server side connection problem – prompted Dwan to cut the session short after a mere 30 minutes. In the chat log, Dwan stated his intention to return within a few hours, but never did.

The duo were supposed to play at least 4,000 hands in the month of August, a goal they did not even come close to achieving. This only a month after Jungleman posted on the Two Plus Two forums indicating that if one player broke the rules, which also require that they play a minimum of 8,000 hands every two months until the challenge is complete, the other would be subjected to strict scheduling restrictions and/or penalties, presumably financial.

As it stands Cates is up over $1.25 million on Dwan, prompting some to believe that Dwan is purposely dodging the online phenomenon. If by the end of the challenge, Cates is up by $1 or more, Dwan will have to pay him an additional $1.5 million. If Dwan is up, Cates would only have to ship $500k. The other condition of the challenge is that the players must play $200/$400 or higher, and four tables at a time.

Even if they stick to the current schedule, the challenge would not conclude until at least March of next year.

All around, it wasn’t a very good night for Dwan. He lost a total of nearly $289k playing $500/$1,000 NLHE games. In fact, just about every Full Tilt pro got slaughtered last week. Gus Hansen continued his terrible year by donking off another $534k and Victor “Isildur1” Blom got smoked for a staggering $255k.

In other news, an unknown who goes by the name of Denoking has been crushing it of late. After appearing on the high-stakes scene last spring, Denoking has been going on swings reminiscent of when Isildur first appeared. He (or she) pulled in $214k last week.

So the question remains: when will Cates and durrrr finally finish their challenge? Let’s hope its still while we’re still young.