According to a player report, Skrill will cease accepting iGaming related transactions from the US’s neighbor to the North. 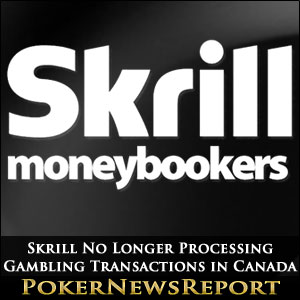 According to a player report, Skrill will cease accepting iGaming related transactions from the US’s neighbor to the North.

2012’s biggest online winner Ben “Sauce” Sulsky recently received an email from Skrill indicating that the payment processor will no longer service online gambling transactions. The change is slated to go into effect on January 2 of next year, with transactions from merchants ending on the January 31.

A portion of the email, originally posted on the 2+2 forums, read as follows:

Skrill will be notifying active gamblers next week and will also communicate this to its broader Canadian customer base. Please ensure you liaise with appropriate departments within your business to communicate this development and to articulate any impact across your organization.

This latest development comes on the heels of two other major announcements. Last summer, private equity firm CVC Capital Partners bought a 75% controlling share of Skrill for 600 million Euros. And in November, the company announced that it was approved by NJ’s Division of Gaming Enforcement to start accepting online gambling transactions. To date, Party Poker NJ, in conjunction with the Borgata, is already accepting payments via Skrill.

Skrill’s sudden departure has left many poker players scratching their heads. Canada does not ban iGaming transactions and Canadians generally have no trouble playing on [geolink href=”https://www.pokernewsreport.com/online-poker-rooms”]major online poker sites[/geolink] such as PokerStars and FTP. However, as members of NAFTA, most Canadian banks implement a no-gambling clause. This is done in order to avoid problems with their US affiliates, which are still subject to the UIGEA of 2006, at least in most states.

However, it appears that thanks to New Jersey’s burgeoning iGaming market, US players who now reside in Canada may have a reason to escape the cold. Yes, Skrill’s farewell may be just the push players need.

Although New Jersey doesn’t have a single site nearly as popular and potentially lucrative as PokerStars, there are reports of grinders from nearby states traveling to New Jersey to play the Sunday majors, which bodes well for the future of the marketplace.  And who knows, maybe one day, PokerStars will be permitted by NJ officials to reenter the­­ US, but not today.