Tallinn´s own Andreas Kaju was the only player the break through the 100,000 chip barrier as 65 players survived Day 1 of the Tallinn Grand Live Main Event. 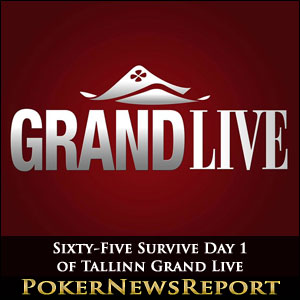 Tallinn´s own Andreas Kaju was the only player the break through the 100,000 chip barrier as 65 players survived Day 1 of the Tallinn Grand Live Main Event.

Season 5 of “The Grand Live” tour (formerly the “Grand Series of Poker”) kicked off yesterday with 118 players ponying up the €1,100 direct buy-in – or qualifying online on the Ongame Network – to compete in the Tallinn Grand Live Main Event.

Players from all over Europe descended on the Swissotel in the city centre for the shuffle up and deal but, after eight levels of action, just sixty-five players remained in contention for the €28,600 first prize – led by a recreational player who lives just around the corner from the venue, Andreas Kaju.

Among the players that started the day with 20,000 chips (equivalent to 400 Big Blinds) were a number of former TGL Champions and some recognisable names from other major European tours. TGL Marbella winner Priit Brikker was joined at the tables by TLG Malta winner Jimmy Rasmussen and last year´s TLG Prague winner Raigo Aasmaa.

Estonia´s all-time money winner – Madis Muur – also joined in the action. Muur is best known for his fourth place finish in the 2014 PCA Main Event, but has also recently cashed in EPT events in Barcelona, Vienna and Monte Carlo. Brikker, Rasmussen, Aasmaa and Muur were all among the Day 1 survivors – Muur performing the best of the four players, to bag and tag 50,000 chips.

Kaju Leads from Bibiks with a Gap Back to the Rest

Andreas Kaju´s rise to the top of the Grand Live Tallinn leaderboard was steady throughout the day. Having more than doubled his chip stack during the early levels of play, he found Aces and got three streets of value against Sander Laprik before making a Full House of Aces over Tens in a three-handed pot against Laprik and Pekka Ikonen.

Kaju bagged up 110,800 chips at the close of play – more than twenty-seven big blinds ahead of his closest rival Romans Bibiks (89,100 chips), who amassed most of his chips during the day in a massive pot against Andrei Mjagkov (twice a TGL final tabler). Mjagkov moved all-in with K♥ K♦ after the flop of 3♠ 4♥ 7♥, but Bibiks (4♣ 4♦) had flopped a set of Fours and Mjagkov was bust a long way from a third TGL final table.

A further fifteen big blinds back in third place, Konstantinos Meliopoulos (76,900 chips) leads a closely grouped field which includes Irishman Gary Clarke. Clarke chipped up nicely during the penultimate level of the day when his A♣ K♠ flopped a Broadway straight to bust Ossi Oinonen (K♣ 10♣) and he goes into Day 2 of the Tallinn Grand Live with 70,700 chips.

Looking Ahead to Day 2 of the Tallinn Grand Live

When Day 2 of the Tallinn Grand Live gets underway at the Swissotel later today, the sixty-five players will be entering Level 9 (blinds 400/800 – ante 100). Play is scheduled to continue until just twenty-seven players remain, but the money bubble will not burst until tomorrow (Friday) – as just fifteen players are going to cash in the event.

At this stage, those with the best chance of leaving The Grand Live Tallinn Main Event with some cash in their pockets include: