A draft bill has been introduced to the Parliament in Singapore that will ban all online gambling and impose heavy penalties on those who break the law. 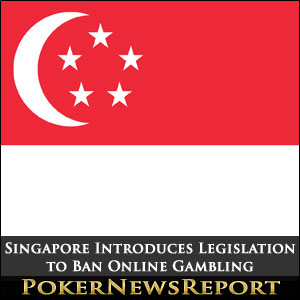 A draft bill has been introduced to the Parliament in Singapore that will ban all online gambling and impose heavy penalties on those who break the law.

The prospect of an Internet gambling ban has been hanging over the heads of Singaporeans for more than a year since the Second Minister for Home Affairs – Mr S Iswaran – announced that the Government was making plans to prevent citizens from using online gambling sites.

Calling online gambling sites a conduit of funds for other illegal activities and organised crime, Mr Iswaran also voiced the opinion that online gambling was more addictive than gambling in brick-and-mortar casinos and said that, not only would the country prevent players from going online to gamble, but also introduce stiff penalties for providers of remote gambling services.

Section 9 of the Remote Gambling Bill 2014 sets out the aim of the proposed legislation – to regulate remote gambling and remote gambling services affecting Singapore with the object of:

If the legislation is passed in its current form, anybody caught gambling online will be subject to a $5,000 fine. Singaporean companies found guilty of the new offence of inviting young Singaporeans to gamble will be punished with a $240,000 fine (and company executives could spend up to six years in jail), and companies that advertise online gambling will be fined $16,000 (affiliates beware!).

Among the other proposals are plans to force Internet Service Providers (ISPs) to block access to online gambling sites and give financial institutions the powers to decline payments to gambling operators; although existing Singaporean non-profit organisations that run online promotions will be able to apply from an exclusion to the proposed legislation if it is considered that their activities are in the public interest.

Operators outside of Singapore face even heavier penalties if they try to circumnavigate the law. Fines of up to $500,000 and jail terms of up to seven years will be imposed on any company or individual who provides an online gambling service to residents of Singapore – even when the resident is using a VPN service to imply that they live outside of the city-state.

Offshore gambling operators will have a defence against the fine if they can show that they could not with reasonable diligence have ascertained that the service had a Singapore-customer link; however, the most likely scenario is that offshore gambling sites will pull out of the relatively small Singapore online market – estimated as being worth about $300 million per year.

Not Surprisingly – No Changes to Brick-and-Mortar Casinos

The proposed Remote Gambling Bill will not affect the two existing brick-and-mortar casinos in Singapore – Genting´s Resorts World Sentosa and Las Vegas Sand´s Marina Bay Casino. Under the legislation adopted in 2005, the two casinos allow free entrance for tourists, but charge casino entry fees of $80 per day or $1,600 a year to Singapore nationals – a measure aimed at discouraging them from gambling.

The Singaporean Government is keen to see players going through the doors of the two casinos, despite its aversion to gaming, as casinos are taxed heavily on their Gross Gaming Revenues – 15% on the majority of their income, with a discount on players who have bankrolls in excess of $100,000. In 2013, Gross Gaming Revenues generated by the two casinos in Singapore hit a record $6 billion – just half a billion behind the combined casinos on the Las Vegas strip!