The cards finally fell in Simon Deadman´s favour at Blackpool, enabling him to win a GUKPT Main Event after four previous appearances on GUKPT ME final tables. 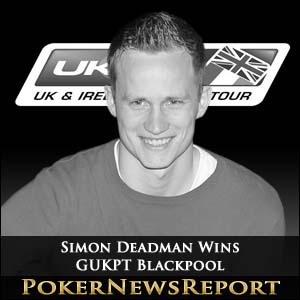 Twelve players made it to the final day of the GUKPT Main Event at the G Casino in Blackpool – the penultimate stop on the 2012 Grosvenor UK Poker Tour before the grand final in London at the end of November – from the 173 players who ponied up the £1,000 buy-in for the event or qualified online.

Luke Reeves was the pacesetter as the tournament entered its climax – sitting behind a chip stack of 826,500 – with his closest pursuers Jack Sandford (381,500 chips) and Paul Marple (367,000). Reeves was also responsible for the first elimination of the day – his pocket Sevens holding over the Fives of Graham Peckover.

There was also a confrontation of pocket pairs as Simon Deadman (9-9) eliminated Stuart Rutter (4-4) in eleventh, and Jack Sandford took a significant stride towards the first prize of £49,290 when calling Paul Marple´s shove (A-K > A-10)and holding.

As the final table became 9-handed, there were hopes that local poker player Sue Cheetham could become the first female winner of a GUKPT Main Event, but Sue was crippled when her A-K could not find a pair against Rob Boon´s QQ and then lost the rest of her chips with an 8-7 shove against the A-Q of Luke Reeves.

Rob Boon went on to eliminate Trevor Reardon in eighth, when his A-K held against Reardon´s A-Q and potential flush draw, and Justin Sevilla was out in seventh – his K-K coming second to Luke Reeves´ A-J when Reeves hit an Ace on the turn. As the table became six-handed, Luke Reeves was still way out in front with 1,500,000 chips.

Deadman on the Rise – Eliminates Reeves

In three major hands Simon Deadman took control of the GUKPT Main Event. In the first he eliminated Ian Gasgoine when Gasgoine shoved with A♠ 10♠ against Deadman´s A♥ A♦. Deadman then hit a nut straight to reduce Jack Sandford to 375,000 chips and doubled up against Luke Reeves when rivering trip Aces to knock Luke Reeves back to 700,000 chips.

Sandford recovered some of his chip stack when busting Wahid Patel in fifth (K-J > Q-8), but it was Simon Deadman who took a significant chip advantage into three-handed play when flopping a spade flush to eliminate Luke Reeves in fourth and take his chip stack to over 2 million chips – Sandford now on 800,000 chips and Rob Boon on 550,000 chips.

Boon and Sandford at Sixes and Nines

The climax of the GUKPT Blackpool Main Event was over in just several hands. Rob Boon (5♥ 3♥) got all his chips into the middle on a flop of Q♥ Q♠ 3♣ and had chances of a flush draw when the A♥ was dealt on the turn, but Simon Deadman´s 6♣ 6♠ held to eliminate Boon in third and increase the size of his chip stack to 2,670,000 against Jack Sandford´s 784,000.

Deadman reduced Sandford´s stack to less than 500,000 when making two pairs in one of the first hands of the heads-up and then it was all over when Sandford moved all-in of a flop of 10♥ 9♣ 5♣ -showing A♥ 5♠ for one pair, but having the misfortune to run into Simon Deadman´s pocket Nines – the hand with which he started his ascendancy when busting out Stuart Rutter early in the day.