Simon Charette took down event #23 after three tough days for a $567,624 top prize – and gold bracelet – at the World Series of Poker in Las Vegas. 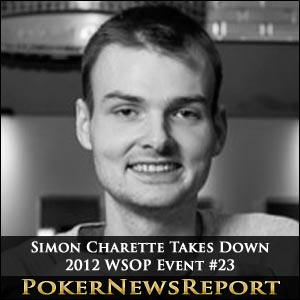 Canada’s Simon Charette took down event #23 after three tough days for a $567,624 top prize – and gold bracelet – at the World Series of Poker (WSOP) in Las Vegas.

The filmmaker had to outlast 923 rivals, which is tough enough, but Day 3 was even more stacked as the likes of Freddy Deeb, Bertrand ‘ElkY’ Grospellier, Eugene Katchalov, Scott Montgomery and Andrew Lichtenberger – who collectively have more than $25 million in live event earnings – were still in contention from the 18 survivors.

The final hand of a very swift heads-up clash saw UK-based Ukrainian Artem Metalidi six-bet shove all-in pre-flop with A♥ 2♠. Charette called holding 6♠ 6♣ and stayed in front on a board that read 9♥ K♦ J♠ 8♠ J♥ to collect the bracelet. Metalidi left with $350,806 as runner-up.

New York-based Ukrainian Katchalov (17th for $21,189) was one of the first players to exit in the Pavilion Room as half-a-dozen eliminations were recorded within the opening half of the day’s first level.

The Team PokerStars Pro shoved with Q♥ 8♥ into the A♠ J♠ of Wisconsin’s Eddie Blumenthal. Katchalov paired his queen on a Q♦ 10♠ 4♣ flop for the lead, while the K♥ turn changed little. However, the A♦ arrived on the river for Blumenthal to send Katchalov to the rail.

Freddy Deeb Out in 10th

New York State’s Lichtenberger didn’t last too much longer, though, as he became the unofficial final table bubble boy when exiting in eighth place for $49,214. His K♣ K♦ couldn’t stay ahead of Metalidi’s A♦ Q♦ on a board that read A♥ A♠ Q♠ 2♣ 4♥ to give the start-of-day chip leader a full house.

The seven-handed final table then saw Canadian Montgomery’s 8♠ 7♠ lose out to the A♣ Q♥ of Charette. The flop came down A♣ 6♠ 2♠ to give Montgomery a flush draw, but that never arrived as the 7♦ came on the turn and the 10♣ was dealt on the river to send the Ontario player out in seventh for $49,124.

Play slowed right down after the Triple Crown winner’s exit, with the five survivors not in any immediate danger of elimination. But that couldn’t last, with Foster Hays, of Dallas, hitting the rail in fifth for $98,756 not long after the dinner break when his 4♣ 5♦ could not improve against the A♠ 8♥ of Kiev’s Metalidi on a 3♥ Q♦ Q♥ 7♦ 9♠.