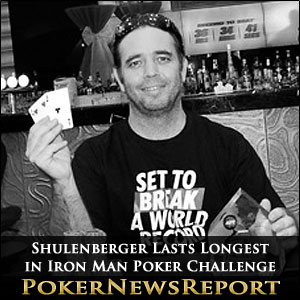 The Iron Man Poker Challenge was held at the Resorts World Manila Casino in the Philippines this weekend as part of the Asian Poker Tour Series. 115 players ponied up the $700.00 buy-in for the world record attempt, which was played with 50,000 starting chips and a very gentle structure.

Level 1 blinds were 25/50, and levels at the beginning of the tournament were one hour long – developing into 90 and 120 minute levels as the tournament progressed. Players were officially allowed a five-minute break each hour, but could leave the table at any time for a nap, something to eat or comfort break, and be blinded down.

The previous record for the longest continuous poker tournament was 36 hours, 34 minutes and 41 seconds (set in Delaware in August 2012), and the APT-RWM Iron Man Poker Challenge looked well on its way to shatter that record when it took 30 hours and 1 minute to burst the 18-player bubble.

Lester Edoc from the Philippines was the unfortunate player who stayed awake for 30 hours to walk away with nothing – after shoving his last four big blinds with 4♥ 6♦ and running into an opponent´s A♣ 4♠ – and the remaining 18 players (including APT Player of the Year Sam Razavi) were assured a min-cash of $1,320.

A Sweat for the World Record Attempt

With six-and-a-half hours still to go until a new world record for the longest continuous poker tournament would be set, organisers at the APT-RWM Iron Man Poker Challenge had to endure a sweat as players were busting ahead of schedule – often due to falling asleep at tables and being blinded out.

It only took 2½ hours for the final table of the APT-RWM Iron Man Poker Challenge to be established; but, at 8.45am Manila time, five players were still seated (and awake) and a new world record had been set. No deals were allowed at the final table and the sleep-deprived players continued for a further eight hours until Sandro Simon bust in third to set the heads-up between Damon Shulenberger (United States) and Choi Byung Kyoo (Korea).

Going to be Hard to Re-Write History

Shulenberger and Kyoo battled on for a further incredible four hours – extending the new world record for the longest poker tournament to 48 hours, 55 minutes and 58.5 seconds – and making it really tough for anybody in the future to emulate their remarkable feat.

Ultimately a short-stacked Kyoo shoved his remaining chips with K♣ 7♥ and got a call from Shulenberger, who had been dealt A♣ 4♥. The board ran A♦ 2♦ 3♥ / J♠ / 10♥ to pair Shulenberger´s Ace and to record him as the winner of the longest continuous poker tournament in the world.

I am mostly a casual player so whereas some people like to play all night, all day I’ve always maintained a commitment to sleeping at least by 2 a.m. or 3 a.m. so I never did an all-nighter like some of my friends. So actually I was really an iron man virgin.