Sheldon Adelson, the billionaire casino owner who has repeatedly voiced his anti-online gambling stance, saw his wealth increase by $15 billion in 2013. 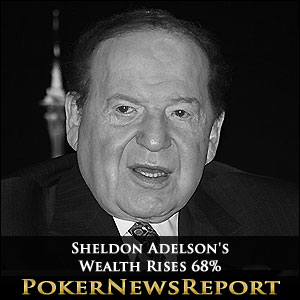 Sheldon Adelson, the billionaire casino owner who has repeatedly voiced his anti-online gambling stance, saw his wealth increase by $15 billion in 2013.

Forbes now lists the Las Vegas Sands CEO’s net worth to be slightly greater than $37 billion, a gain of 68% in 2013. In September, Adelson was the 11th richest man in America. His massive fortune grew by $41 million per day, landing the 80-year-old in 5th place among the wealthiest U.S. citizens, AP reported.

Much of Adelson’s wealth is attributable to immense revenue from his casinos in Singapore and Macau. A plan to open a new casino in Madrid, Spain was recently cancelled. Adelson has no qualms about expanding brick and mortar gambling, but is vehemently opposed to online poker and casino games.

Adelson has begun forming a coalition to fight the legalization of online gambling in the U.S. He has vowed to spend whatever it takes in his quest to persuade lawmakers to vote against the proliferation of Internet gambling. Many view his stance as hypocritical considering that his fortune was built upon casino gaming.

The multi-billionaire recently penned an op-ed piece in the Las Vegas Review-Journal in which he cited a survey of his own undertaking that found 70% of Americans opposed to online poker. A similar Reason-Rupe public opinion survey taken this month obtained completely opposite results. Reason-Rupe found that 65% of U.S. citizens favor online poker.

The billionaire casino owner’s view against online gambling was on display at a December 10 Senate subcommittee hearing that reviewed “The State of Online Gaming.” While Adelson did not testify, his anti-Internet stance was put forth by another Las Vegas Sands executive, Andrew Abboud.

Results of the hearing were seen as generally favorable to online poker advocates, with representatives from the PPA and AGA making a strong case for regulation. Despite a successful hearing for the pro-online poker crowd, no further hearings have been scheduled on the federal level.

Adelson has donated millions to Republican causes in the past. His pockets may be equally as deep with regard to his goal to wipe out online gambling regulatory efforts. Although Adelson’s views toward Internet wagering are likely a minority among casino executives, his voice is a strong one due to his enormous wealth.