As online gambling makes a resurgence in the U.S. in a state-by-state regulatory scheme, Sheldon Adelson is preparing a vigorous campaign against it. 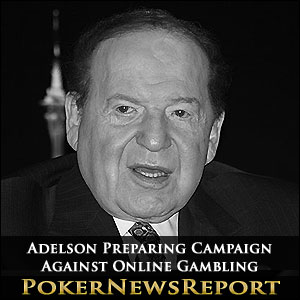 As online gambling makes a resurgence in the U.S. in a state-by-state regulatory scheme, Sheldon Adelson is preparing a vigorous campaign against it.

The billionaire casino owner has hired public relations pros and lobbyists in an effort to exert his anti-Internet gambling beliefs on lawmakers. Adelson has established a Coalition to Stop Internet Gambling that will be introduced in January aimed at showcasing the ills of online gambling, the Washington Post reported.

Those ills, according to the 79-year-old casino mogul, include the potential harm that Internet gambling may bring to minors, the poor, and those who are susceptible to addictive behavior. Many will recall that Adelson told Forbes in June that problem gamblers may lose their house at the click of a mouse.

The Poker Players Alliance, the grassroots organization that has been advocating strongly for the legality of online poker throughout the U.S., recognizes the stance of Adelson as just one more hurdle to overcome. PPA executive director John Pappas believes online gambling will prevail, as “millions of Americans” as well as lawmakers in “dozens of states” are supporting the freedom and right of players to be able to wager online legally.

Adelson is in the minority among casino owners. Most of his colleagues favor online poker and gambling and the revenue that regulation will bring. Safeguards to prevent minors from gaining access to Internet gaming sites as well as programs to assist addictive gamblers are being instituted to combat the issues with which Adelson finds fault.

The Las Vegas Sands honcho has almost unlimited resources to fight his personal battle against online gambling. Two months ago, Forbes ranked him in 11th place among the wealthiest Americans with assets that total $28.5 billion.

Adelson has donated heavily to Republican causes in the past. His generosity in the 2012 elections toward GOP candidates apparently broke records. However, much of that donated cash went to losing causes. The online gambling industry is hoping that the money Adelson throws at preventing the regulation of Internet gambling will also be for naught.