‘shaundeeb’ Deeb has dominated the PokerStars SCOOP 2012 to collect a fourth high stakes title – this time for winning event #38, the H.O.R.S.E. tournament. 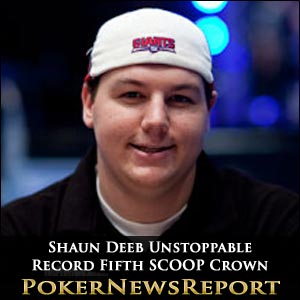 American Shaun ‘shaundeeb’ Deeb has dominated the PokerStars Spring Championship of Online Poker (SCOOP) 2012 to collect a fourth high stakes title – this time picking up $46,325 for winning event #38, the $2,100 buy-in H.O.R.S.E. tournament, after outlasting 84 other starters on Saturday.

With just the last six of the 120 events to be played out, can Deeb add another title from this year’s series? We’ll find out soon enough.

American Star is On Fire

But it’s not just victories that have highlighted Deeb’s domination of the fourth SCOOP as the Mexico-based pro also has 25 cashes and eight final table appearances to have secured $236,951.39 winnings from this latest staging of the online poker series.

This latest success saw Deeb outlast players such as Team PokerStars Pros Bertrand ‘ElkY’ Grospellier, Eugene Katchalov, Nacho Barbero, Ivan Demidov and Chad Brown – none of whom made the money – as well as Team PokerStars Online member George ‘Jorj95’ Lind III, who did make the final table before exiting in eighth place for $5,525.

The final hand in the early hours of yesterday morning arrived during a round of No-Limit Hold’em, with Deeb having dominated heads-up opponent Jon ‘LUFCBas’ Spinks, of England, after the former had started their head-to-head with a healthy 252,879 to 172,121-chip lead.

Spinks and Deeb saw a flop of 10♦ 8♠ 5♥, prompting the American to check-call the British player’s bet. Deeb then check-raised on the K♣ turn, only for Spinks to re-raise to 30,000. The American pro then capped and the Brit shoved all-in.

Spinks revealed A♦ 5♣ to hold bottom pair, but Deeb had Q♠ 10♣ for a pair of tens and the lead. The Englishman required a five or an ace on the river to stay alive, but the 6♣ was a blank, so ensuring that Deeb claimed his fourth title of SCOOP 2012 and Exeter’s Spinks left with $31,450 as runner-up.

Meanwhile, straight-talking English pro Luke ‘lb6121’ Schwartz collected his first SCOOP victory – and Movada watch – on Saturday when taking down event #36, the $5,200 buy-in (high) Pot-Limit Omaha Six-Max tournament, for $174,200 after seeing off the challenge from the 133 other starters.

The London player defeated Canada’s ‘MrDurden’ in their heads-up clash to leave the runner-up with $117,250, while Argentina’s Barbero collected $14,405 for exiting in 12th place.

Costa Rica-based American Mike ‘Sowerss’ Sowers also scooped his first title in the series when earning $61,290 for taking down event #36, the $530 buy-in (medium) Pot-Limit Omaha Six-Max, to add to the WCOOP crown he collected back in 2009.

The North Carolina pro saw off a 681-player field to ultimately overcome Sweden’s ‘BackDoorovic’ in their heads-up meeting that left the second placed player with $45,967.50 as a consolation.

Finally, on Saturday, Argentinian Barbero – who has so far enjoyed a good series without scoring a victory – managed another deep run, this time in the $215 buy-in (medium) H.O.R.S.E. event #38, but again fell short for his second runner-up spot of 2012.

The winner was collecting his second SCOOP crown of this series – after picking up event #19, the $27 buy-in (low) Triple Stud tournament, for $8,348 – to move atop the Medium Player of the Series leaderboard, while also holding second in the low category and overall leaderboards, although the Canada player has no chance of taking the latter with Deeb way out in front.

San Jose’s Jaka began the match-up on 890,003 chips to dominate the 321,997 held by ‘HC_68’ – and continued to reduce his opponent’s pile over the next 20 minutes, before finally finishing off the Austrian.

‘HC_68’ then called all-in to show 10♣ 10♠ to be in front, although Jaka had found a flush draw with his 6♠ 3♠. The J♠ came on the turn to give Jaka his flush, but he wanted to avoid another spade on the river as that would bring his opponent’s 10♠ into play. Additionally, another jack would also give the Austrian a full house. However, he was OK as the 8♥ came down and Jaka was champ.

Russian Maxim Lykov recorded yet another final table appearance but exited in fifth place for $48,480, while fellow Team PokerStars Pro Vicky Coren, of England, took 17th place for $10,100 and Mexico-based Deeb continued with his wonderful SCOOP by collecting $14,140 in 12th.

Also worthy of note is the win for consistent Canadian Ami ‘UhhMee’ Barer in event #35, the $27 buy-in (low) No-Limit Omaha Hi/Lo tournament, for $11,578.96 after seeing off 2,930 opponents as he now has four final table appearances this series and an impressive 17 cashes.

PokerStars Team Pro member Martin Staszko, meanwhile, has displayed incredible consistency by cashing in 20 events. The Czech Republic pro’s most recent in-the-money finish arrived on Friday when he picked up $6,510 for finishing eighth in event #35, the $2,100 buy-in (high) No-Limit Omaha Hi/Lo tournament, which was won by British player ‘plplaya’ for $41,600 after a thee-player deal.