American Shaun Deeb has created a piece of Spring Championship of Online Poker (SCOOP) history with his fourth title at the PokerStars series. 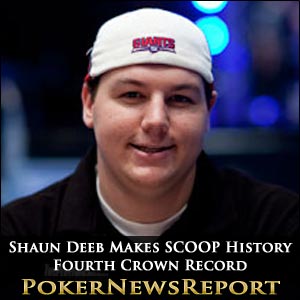 American Shaun Deeb has created a piece of Spring Championship of Online Poker (SCOOP) history with his fourth title at the PokerStars series.

Incredibly, he has already won three events during this fourth staging of the virtual poker festival to add to the Pot-Limit Omaha (medium) crown he snapped up back in 2010.

But that’s not all, as Mexico-based Deeb even managed to earn an additional $1,089 with seventh place from the low stakes ($27) buy-in version of the same event – to ensure that he has now 19 cashes and seven final table appearances…so far!

American On Course for Overall Player of the Series

With stats like these, Deeb looks almost unstoppable and will surely collect the Overall Player of the Series prize come the close of SCOOP on Sunday. Right now, Deeb – who plays under ‘shaundeeb’ – holds a 245-point lead over his nearest rival, Uruguay’s ‘joacowalter’.

Back to Deeb’s historic victory – and the New York State pro had to outlast some of the poker world’s biggest names, including Team PokerStars Pros Kristian Martin (10th for $4,070) and Theo Jorgensen (11th for $4,070), in the 74-player field to collect the top prize.

Champion Picks Up Third Title of 2012

But it was Deeb who emerged victorious from an eight-handed final table that also featured Ukrainian Team PokerStars Pro Eugene Katchalov (fourth for $14,060) – in his third final table of the series – Colombian Daniel ‘DazzleO’ Ospina (eighth for $4,810), Denmark’s Fred_Brink (fifth for $10,360) and Brazilian Rodridgo Caprioli (third for $20,720).

Deeb began his heads-up clash with New Zealand’s ‘PerpCzech’ way behind on chips – 119,783 to his opponent’s 250,217 – but the American battled back into contention when securing the first significant pot with a pair of kings.

It wasn’t long before the event’s biggest pot arrived, with Deeb collecting the win with two pair, although ‘PerpCzech’ was in no mood to give up just yet as he fought back to draw level once again.

However, Deeb then picked up successive 100,000 pots – one of which was a rather handy wheel straight – that left the Kiwi crippled and ready to move all-in on the very next hand.

Still, ‘PerpCzech’ – who has made several final tables so far – is definitely enjoying a fine SCOOP so far, adding $27,380 to his growing bank balance that enjoyed a $13,744.50 boost from his victory in event #19, a $215 (medium) buy-in Triple Stud tournament, early on Sunday morning.

Uruguay’s ‘joacowalter’, meanwhile, has managed to stay in touch with Deeb at the top of the Overall Player of the Series leaderboard by taking down his second title of the festival when pocketing $30,680 for his success in the $1,050 (high) buy-in Fixed-Limit Triple Draw event #25.

Another challenger to Deeb’s top spot on the leaderboard, Lind, also enjoyed a good day, securing his first success of the series for $9,352.58 in event #26, a $27 (low) buy-in Stud Hi/Lo tournament. German Team PokerStars Pro Danzer took eighth place in that event for $544.50.

Deeb isn’t just top of the overall leaberboard, though, as the American – with 26 tournaments of the series completed – also heads the high standings by 120 points from ‘joacowalter’ as numerous players hope to collect the trophy and PokerStars Caribbean Adventure (PCA) 2013 package.

Amazingly, Deeb (195 points) is also second on the low table, just 10 points adrift of Lind (205), while the medium category is led by ‘SebbyGl’ on 190 – who is just 25 points clear of fellow German ‘cyberkanguru’ (165), although numerous other players are also all very close by.